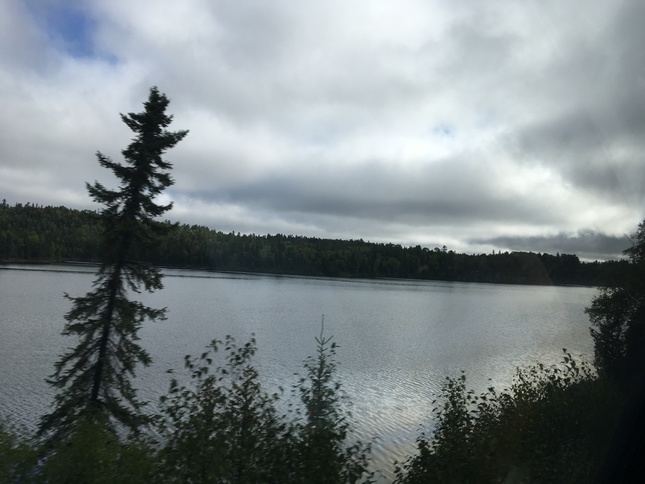 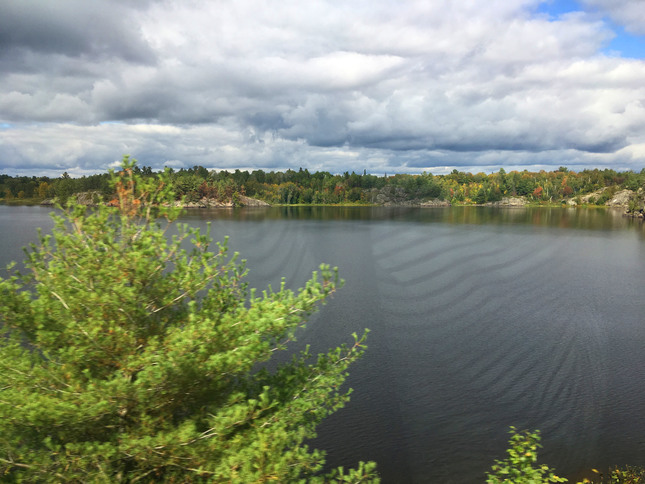 Today it is a center for fly-in hunting and fishing camps and historically was a canoe route for European fur traders. 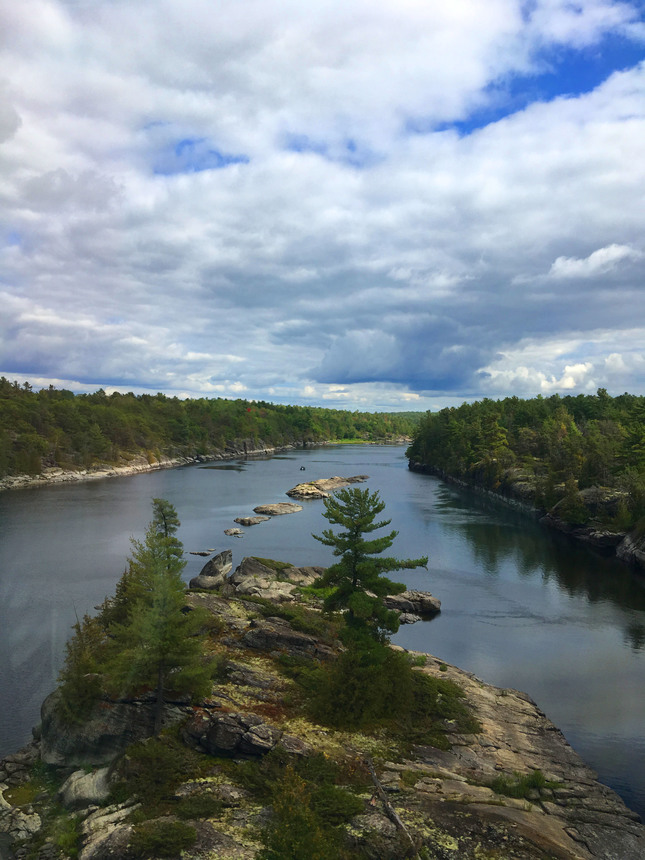 Journalist William Hard described the area more than a century ago, “It is a land where nature started to say something and stuttered a thousand times, an extraordinary region where there is one small landscape constantly shifting.” The depiction still holds true for today. 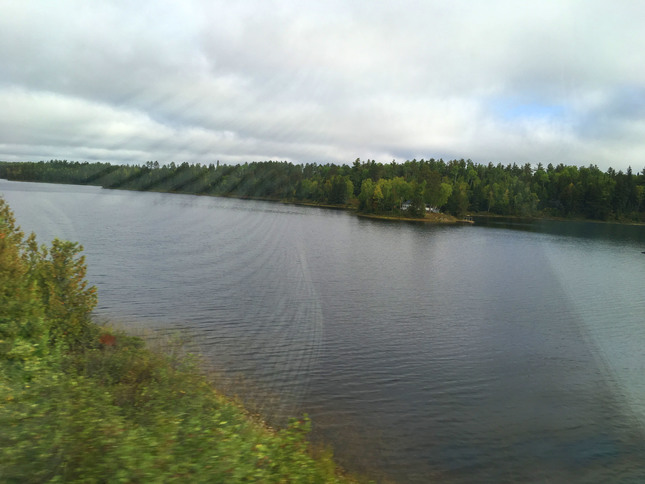 The massive boulders, colorful birch trees and interspersed pine remind me of the New England scenery that we loved so much when we lived there many years ago. You can tell by the blur of the picture that the train has sped up—they are still trying to make up time. I think we’re only 9 hours behind schedule now. 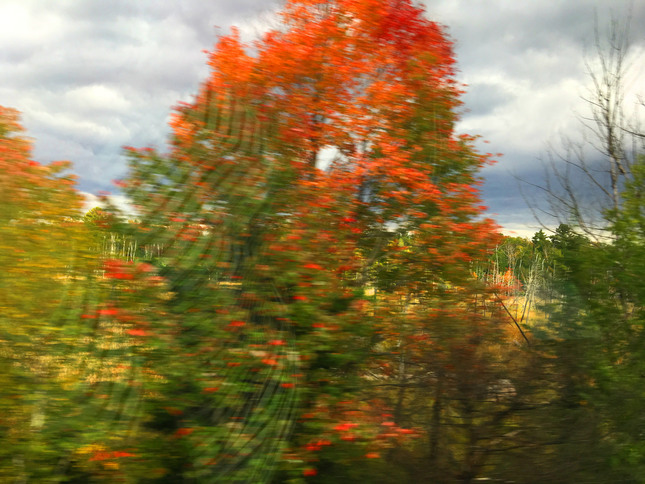 We now go through some tunnels again—the first we’ve encountered since we left the Rockies. There are also many marshy patches with streams snaking through. 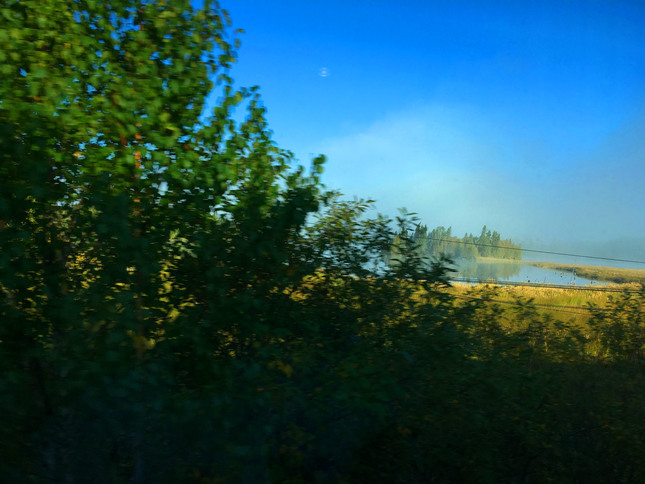 Only a brief stop today, but we make the most of it. 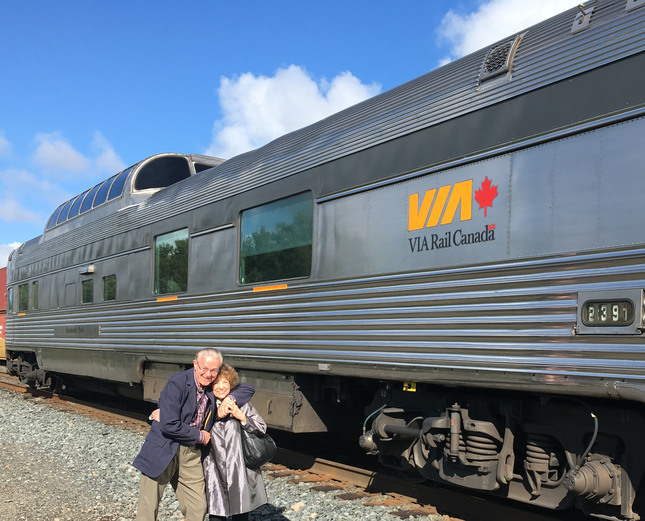 Since I will be using this experience as background for my next novel, I ask the porter David for a tour of the train. Our cars are at the very back, so he takes me forward.

There are 3 major sections, with varying accommodation within each one. Each section provides a lounge/dome car, and a game car offering puzzles or chess/checker boards on the tables. There is occasional live entertainment such as talks and music in these cars as well. There are also separate dining cars and kitchens for each group. The kitchens exude heat as we walk by them in the narrow passage.

David explains that there are 2 porters for every 3 cars, a chef and cook for each kitchen, with a total staff of about 60. In front of the coach is the baggage car and the engine. I am busily writing notes, trying to figure out how my heroine Felicity would react if she encountered a murderer along the way. Or how she would manage to get into one of the locked compartments if she needed to. Of course, there are the roomettes only protected by a heavy grey curtain—a good lurch of the train could send her through that. . .

I arrive back in our room in time for afternoon tea. I recall the Frenchman who was our companion at dinner last night. He nodded at my tea and asked, “It is convenient for you?” It is very convenient. 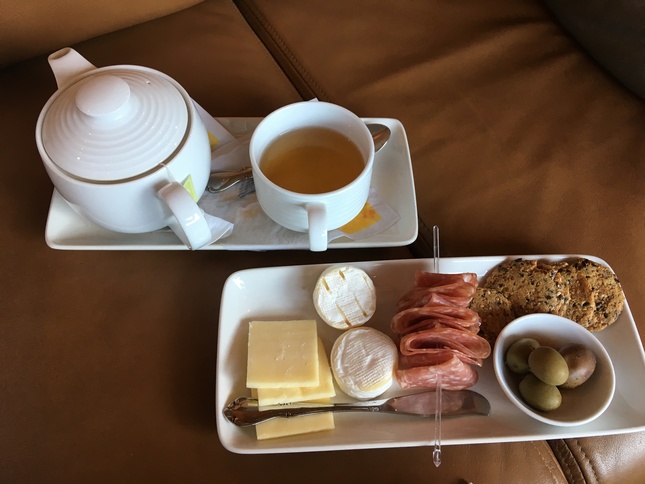 If you missed the story of the hair-raising start to our journey, you can read Day 1 here, then Day 2 Across the Rockies here, and Day 3, The Sweep of the Canadian Prairie. Join us next week for Day 5, Arrival and Onward.

Watch for the up-coming Against All Fierce Hostility, book 6 in the Monastery Murders, for Felicity and Antony’s adventures aboard the Canadian when Antony is invited to lecture on the British saints who inspired the founding of Toronto and Felicity couriers an ancient manuscript connected with Saint Patrick to monasteries in Montreal and Vancouver.  Their train journey across the breadth of the continent carries them ever further away from the murder Felicity witnessed in England. Or does it?