Garden Science at Disney Worldâ€™s Living with the Land 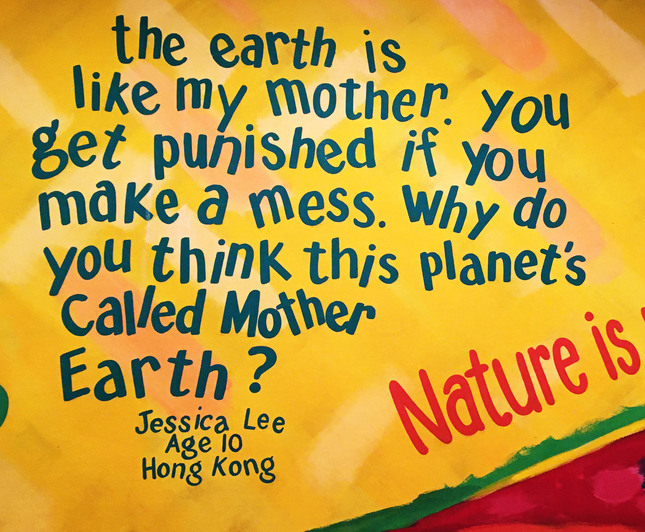 Mickey Mouse, Princesses, fantastic rides—all things that spring to mind when one thinks of Disney World.  Cutting edge science might not be at the top of most lists. At Disney’s Epcot Center, however, their scientists are applying innovative methods for growing food to feed the world of the future. 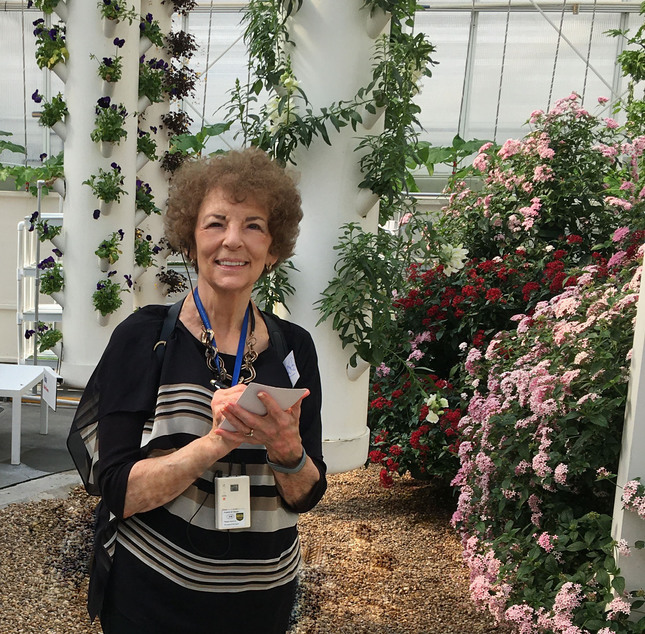 We were at Disney World recently to celebrate a daughter-in-law’s significant birthday and managed to book tickets for the “Behind the Seeds” walking tour which literally takes you behind the scenes of "Living with the Land." We enjoyed a close-up look at Disney’s experimental gardens where scientists work to solve 5 major challenges in food production:

Using beneficial insects to overcome harmful insects is Disney’s approach to cooperating with nature. The example Drake, our guide, showed us was how they deal with leaf miner insects whose larvae eat the leaves on which they hatch.

Disney’s solution: introduce a variety of wasps who eat the larvae. 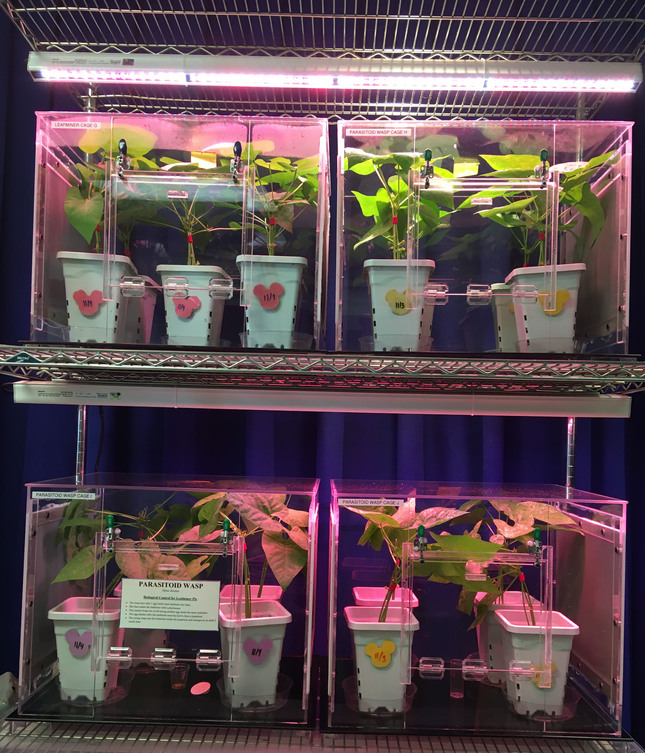 Scientists are also at work cloning plants. Growing new plants from cells in a growing mixture called agar produces new plants far more quickly than using root stock. It also has the benefit of producing an exact replica of the parent.

Plants and animals (primarily fish) are paired so as to be mutually beneficial to each other. The roots of plants keep the water clean for fish. Fish provide nutrients for the plants. 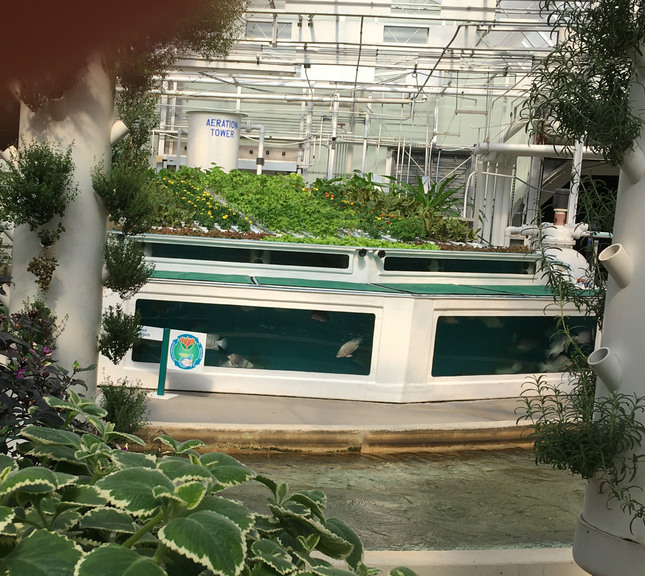 Tilapia are an especially beneficial fish because they are easy to grow and provide a high ratio of low-fat, high-quality protein per pound of protein fed to them.

Even tourists on the boats viewing the gardens from the front are part of the ecosystem as they provide warmth and as they exhale carbon dioxide while the plants photosynthesize oxygen. 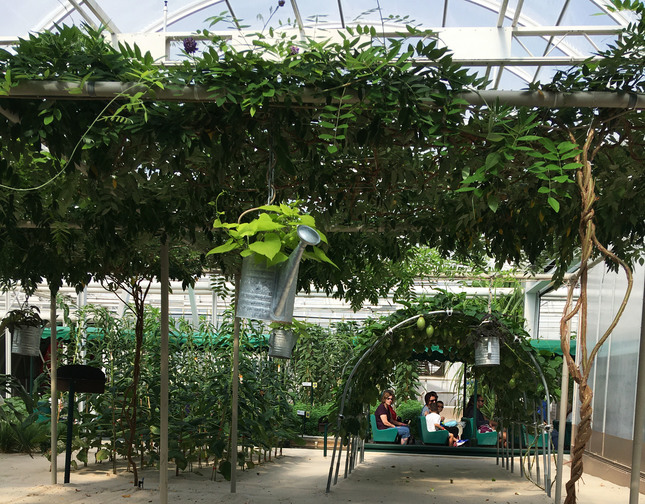 As world population expands and less land is available for agriculture, it is increasingly important to use our space efficiently. At Disney World solutions include:

Growing vegetables such as eggplant on trees which can be planted closer together than the usual bushes. They can also be harvested more efficiently. 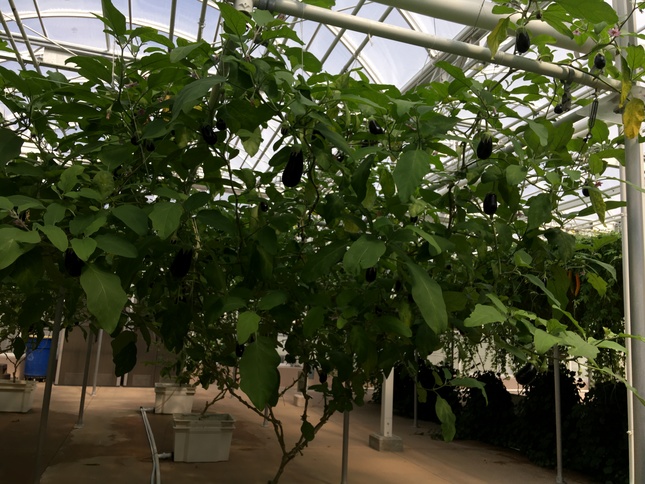 Growing vining plants such as cucumbers and beans on strings, rather than letting the vines trail over the ground. Again, this provides more efficient harvest, as well as allowing plants better access to air and sunlight. Reduced problems with ground insects and fungus are an added bonus. 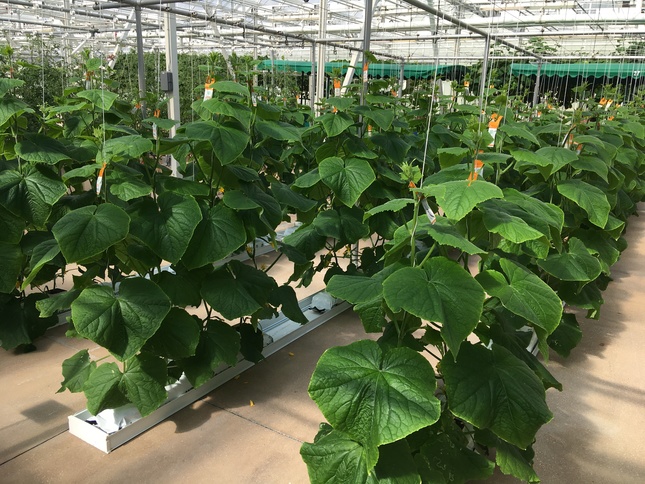 Growing tomatoes “up” produces more fruit for less water and allows more light and nutrients to get to the plants. Wrapping vines around the poles and removing bottom leaves lets vines grow up to 50 feet long and produces a readily accessible bumper crop which supplies many of the Disney restaurants. 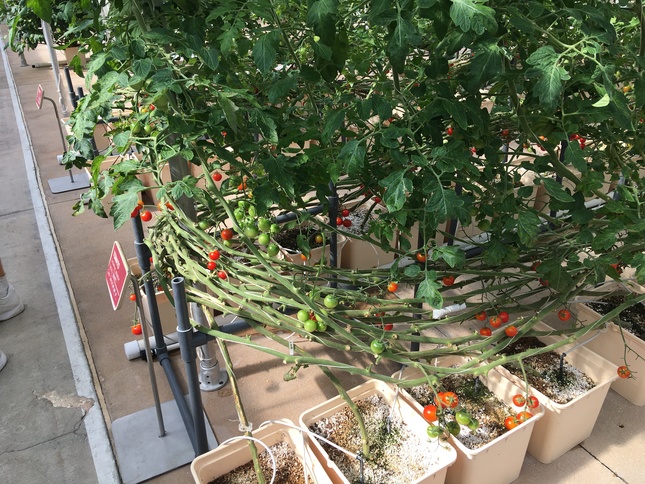 Drake explained that as long as plants have 5 essential ingredients they can grow anywhere. Disney scientists produce amazing results in sand when they supply their plants with: light, air, nutrients, warmth, and pollinators. Throughout our tour we heard a gentle popping noise of their system injecting plants with nutrients. 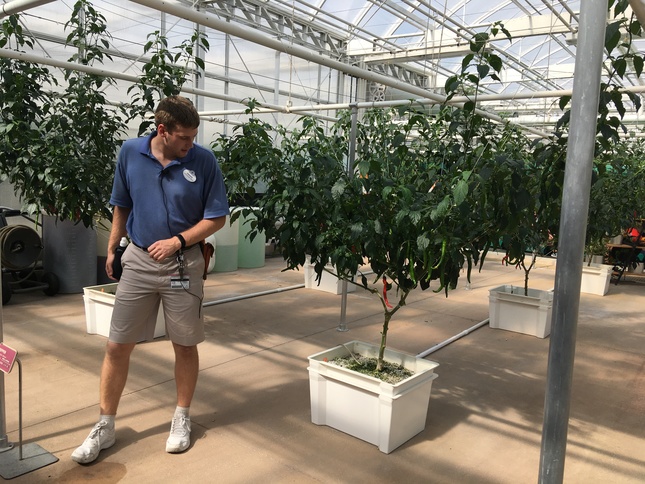 The Nutrient Film System injects lettuce plants with chilled water and nutrients 24 hours a day. The plants grow twice as fast as normal. Even in their small space they produce 2000 heads a week.

A variety of plants grow hydroponically  in tanks of water. 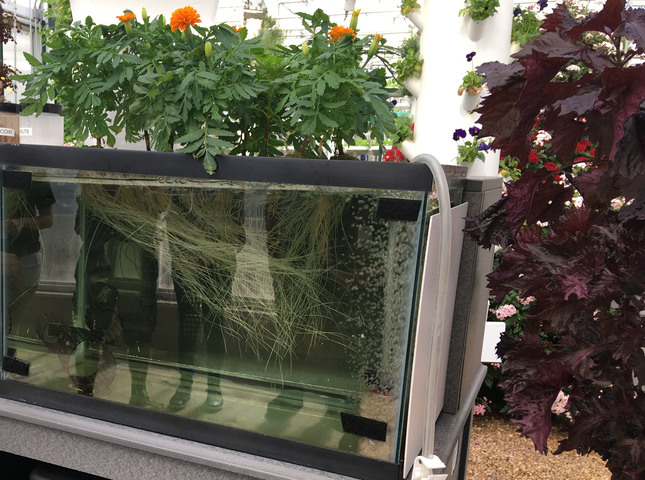 Disney’s drip irrigation system which avoids wasting water is used in the Sahara and other drought-prone areas of the world.

I have eaten the beautiful, but mild-flavored dragon fruit, but had never seen it growing before. Drake explained that in nature dragon fruit is pollinated by bats. Thankfully, it is done by hand here. 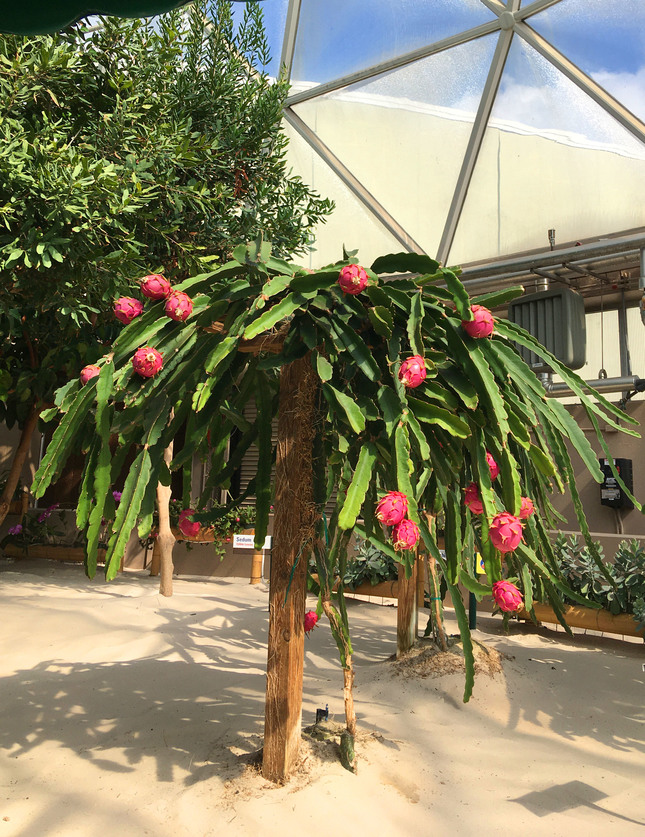 We learned that a banana flower produces a banana from each petal of the flower. Growing them on shorter trees makes them easier to harvest. 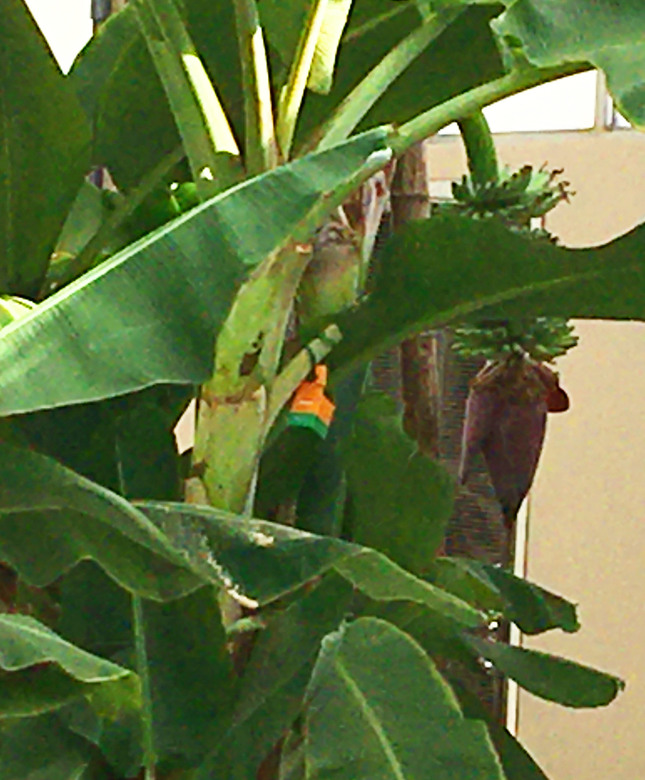 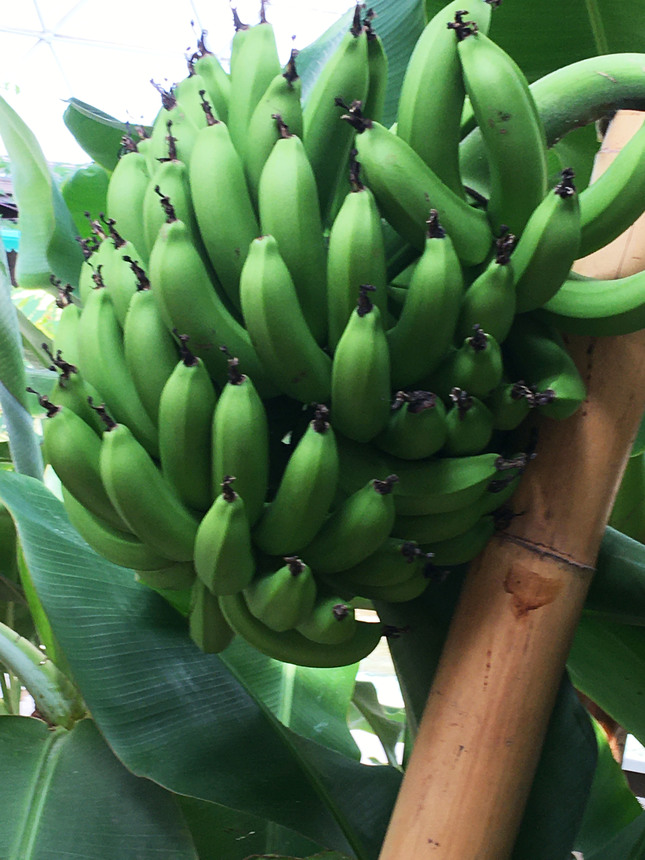 I have often used citron as an ingredient in making Christmas cake. I always thought it was merely a mix of citrus rind. Now I know citron is its own plant. 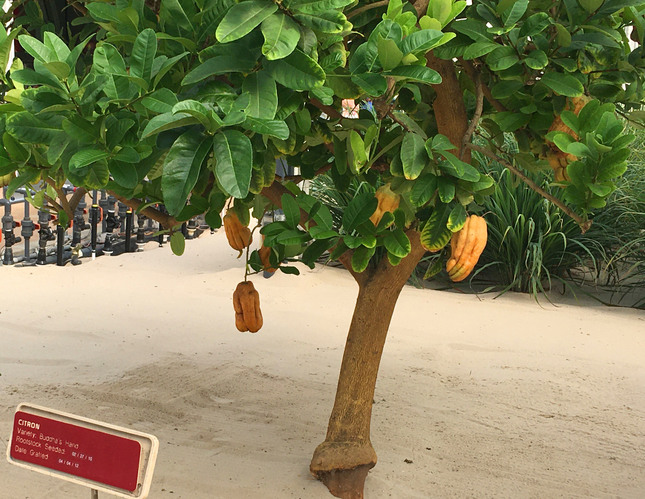 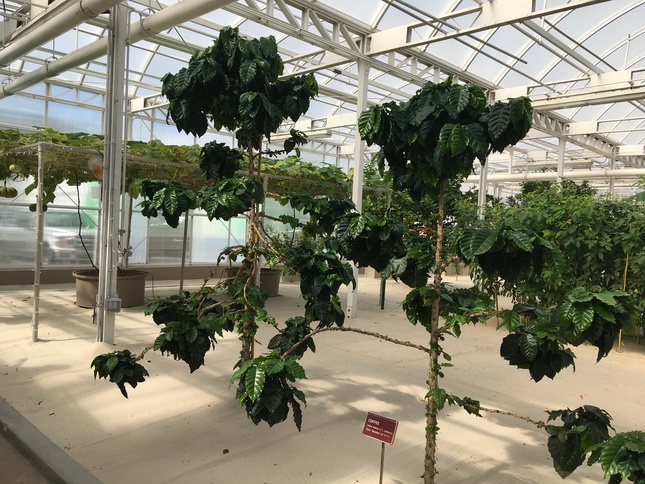 And, of course, because this is Disney World, there is an element of fun—as there should be in every good garden: 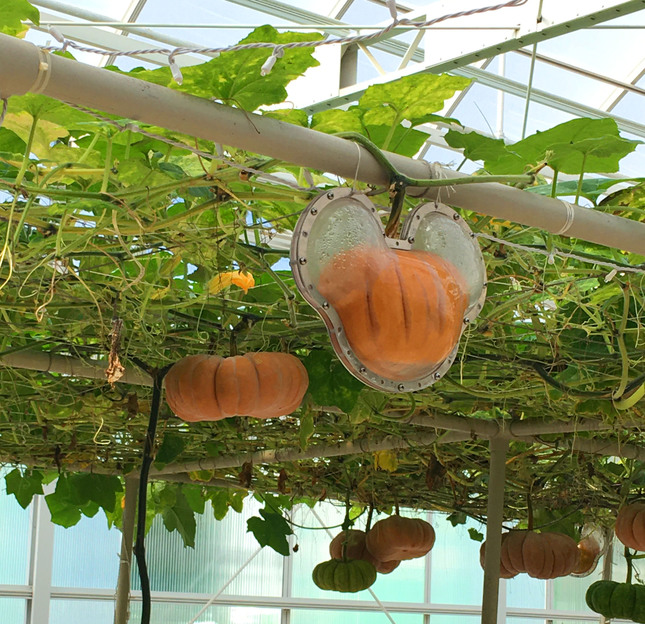 Topiary experts remind us of where we are. 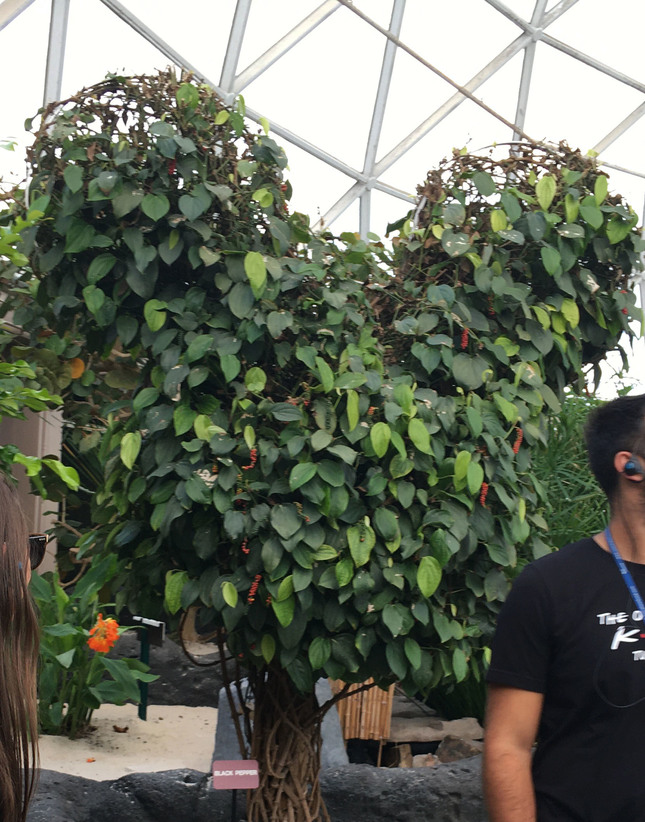 Even hoses are wound artistically. 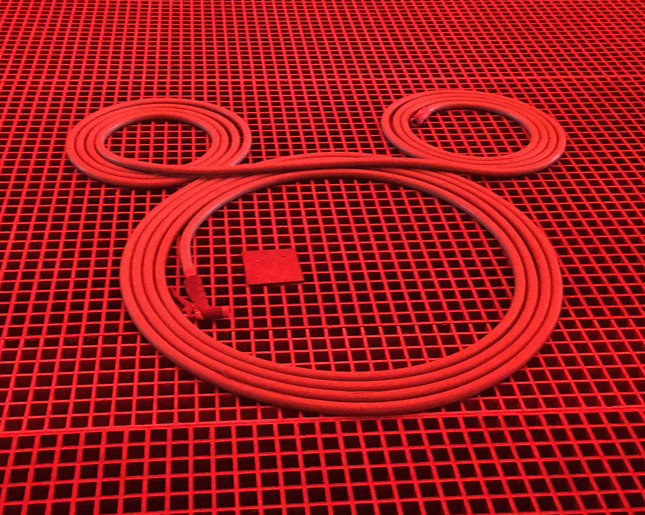 When one person on the tour inquired as to the scientific advantage of the rotating coils growing lettuce, Drake replied. “None at all. This is Disney World and our imagineers said there should be movement in our garden.” 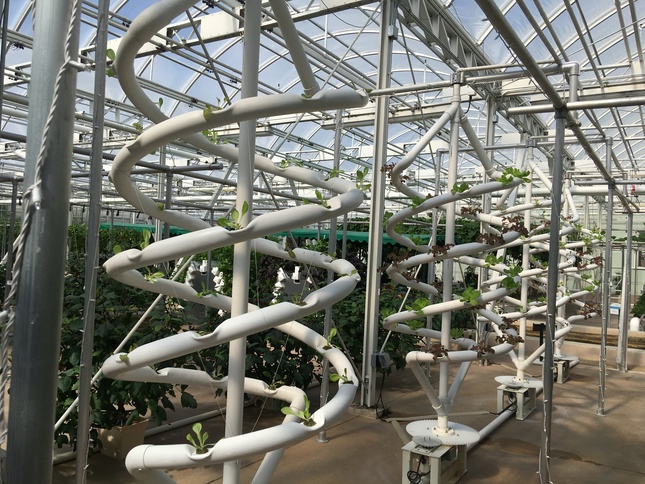 Feeding the world and having fun—an unbeatable combination.

Next week, look for "The Power of Story--Thoughts from a Princess Breakfast" in my Disney World Reflections series.

This is fantastic. I look forward to getting a book. I have started a hydroponic garden, but I love the idea of hanging some of the plants upside down.
I hope to get over to see the Disney Expo
-Susann, November 18, 2019

Thank you, Susann. Yes, the ideas were thoroughly inspiring. I have just added raised beds to my garden for my grandchildren to grow vegetables, but would never have thought of all these innovations.
-Donna Fletcher Crow, November 20, 2019