“Home is the sailor, home from sea”. Well, okay, we haven’t really been sailing—just contemplating the sea from the shore and sometimes thinking of Jane Austen’s sailor brothers. But we are concluding our journey today where Jane concluded her later seashore journeys—at her home in Chawton.

As every Austen fan the world over knows, Chawton Cottage is the home Jane’s brother Edward provided for the Austen women in 1807. After the death of the Reverend George Austen in 1806 Jane, her mother Cassandra and their mother continued to live for a time in Bath, albeit in reduced circumstances. Then they lived with Francis Austen’s family in Southampton as we saw in our visit there.

These were remarkably unproductive years for Jane’s literary career—sometimes referred to as her “lost years”—living as she did a somewhat vagabond life, often amid the bustle of a large family. Finally, brother Edward, heir to the Knight estate, offered his mother and sisters a cozy cottage on his estate in Chawton.

At last—a quiet, settled life, near to beloved Steventon where Jane had been born and lived the first  years of her life until she had been suddenly ripped away by her father’s decision in 1801 to retire and move to Bath, giving the living of the parish to his son James.

At Chawton cottage the household of 4 women organized themselves according to their natural proclivities. Mrs. Austen was the gardener. It was said she was particularly fond of growing potatoes. Cassandra oversaw the running of the house with their one maid. Friend Martha Lloyd was the cook and her recipe book survives to this day. Jane began each day playing the piano, then fixed the family’s breakfast. This left her free for the rest of the day to write.

It was the move to Chawton cottage that allowed her writing to flower. There she revised the books we now know as Pride and Prejudice and Sense and Sensibility, then, buoyed by their publication, went on to write Mansfield Park, Emma, Persuasion and the first 12 chapters of the sadly unfinished Sanditon—all written at the small, round pedestal table by the window in the parlour.

Just down the road was Chawton House, referred to in Jane’s letters as “the big house.” The Austen ladies were frequent visitors there, often dining with Edward, who preferred this house to the grander Godmersham in Kent.

St. Nicholas parish church is next to Chawton House and Jane worshipped there regularly. Inside the church are memorial tables to both Cassandras—Jane’s mother and sister. And they are buried side by side in a sheltered corner beside the south wall of the church under a leafy tree:

On this visit I spent most of my time at the Big House. My friend Ros and I were greeted by the librarian Darren Bevin and given a tour—a rather disrupted tour because a film company was shooting a movie at the time. “Careful. Mind the cables,” was a frequent warning as we made our way around the equipment. Many of the rooms were rearranged to portray the War Office during the 1940s and were peopled by actors in double-breasted, pin-striped suits. 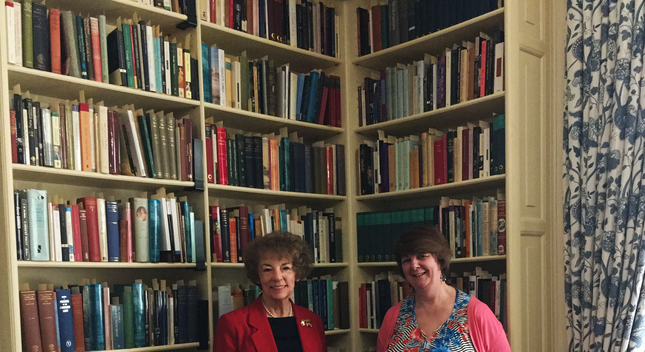 One room, however, that remained untouched was the lofty library. Besides pointing out many special books, our guide revealed the library’s secret—a shelf of “books” that opens to become a bar. 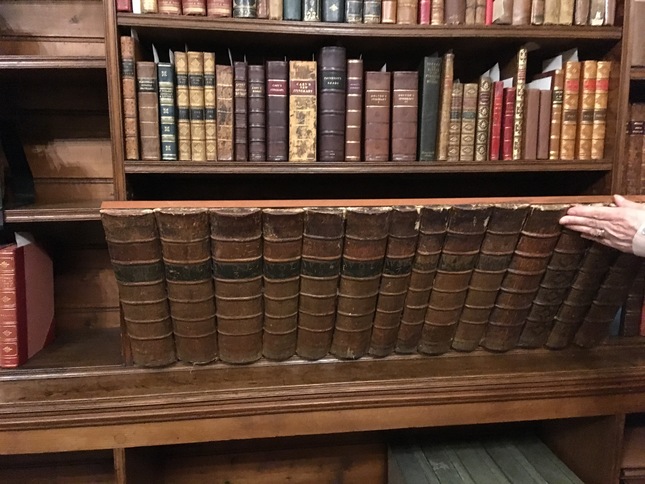 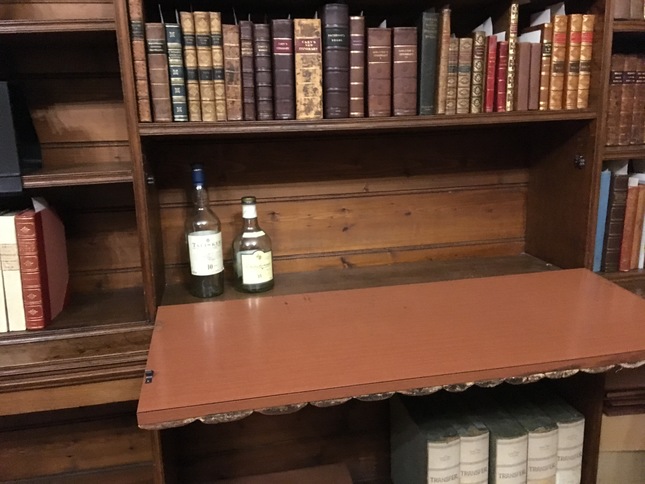 An important effort is now underway to restore the Knight family collection that Jane so enjoyed at Godmersham. Thanks to the efforts of the Lost Sheep Society the scattered collection is gradually being located and the shelves at the Chawton House Library are filling with volumes from the l819 catalogue.

Including Fanny Burney’s Camilla, whose printed subscription list is the only time Jane Austen’s name appeared in print during her lifetime: Mifs J. Austen, Steventon

Other volumes that took my eye were the Fordyce Sermons to Young Girls in two volumes, which Mr. Collins famously attempted to read aloud to the Bennett young ladies, Self-Control by Mary Brunton, The New Barontage of England, Vol II, (containing the lineage of Edward’s wife, the Bridges family), and Richardson’s History of Sir Charles Grandison.

The library is also home to more contemporary works on Austen. I was thrilled and honoured to have my A Jane Austen Encounter and A Most Singular Venture accepted into the collection by Mr. Bevin. 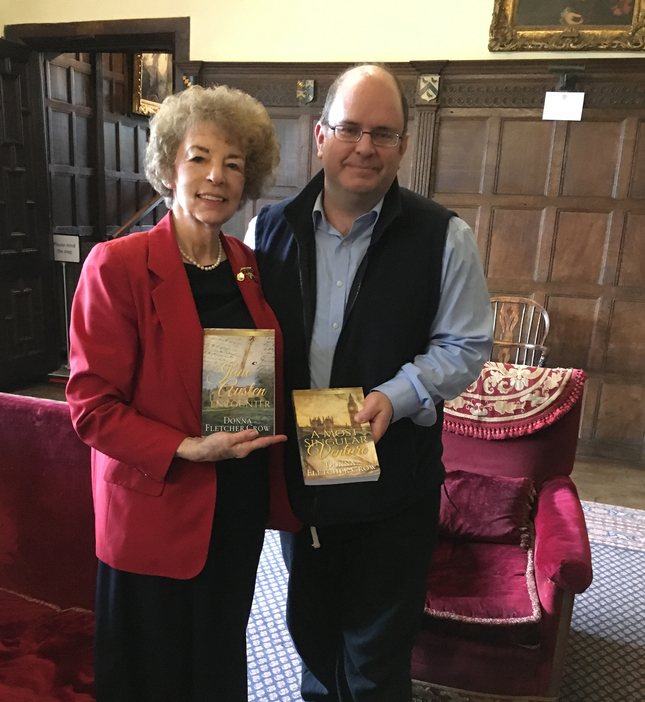 Ros and I enjoyed a lunch of soup and bread in Chawton House’s former kitchen. 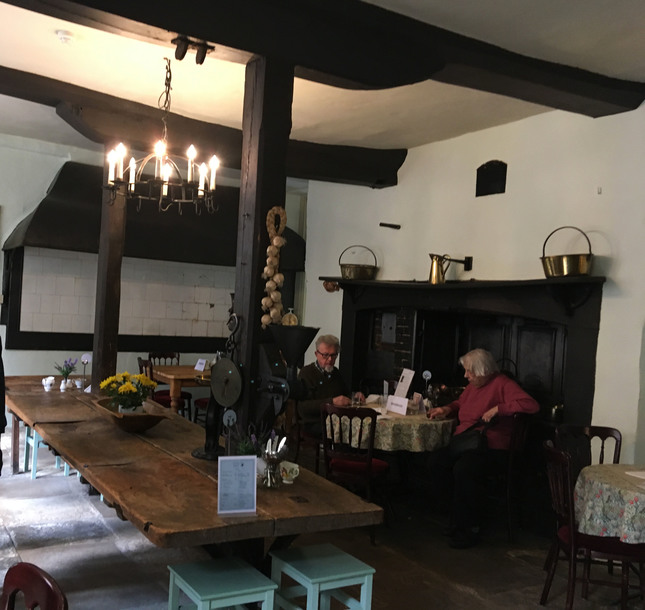 Then strolled around the peaceful gardens. On this visit I found myself quite overcome with the atmosphere—far more so than on my first visit. It was rather like rereading a book where one had focused so hard on the plot the first time that one missed the details. 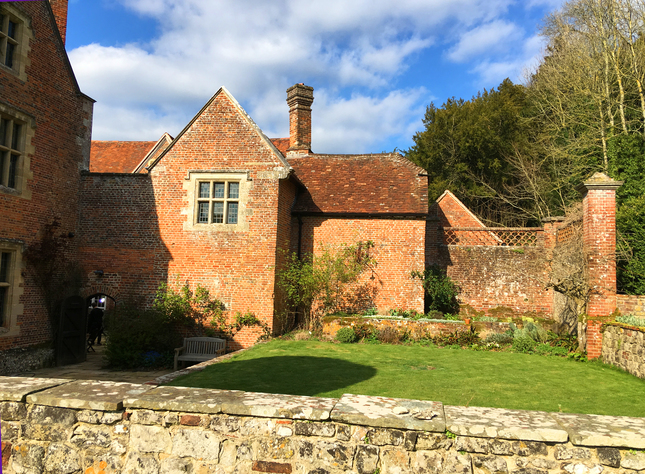 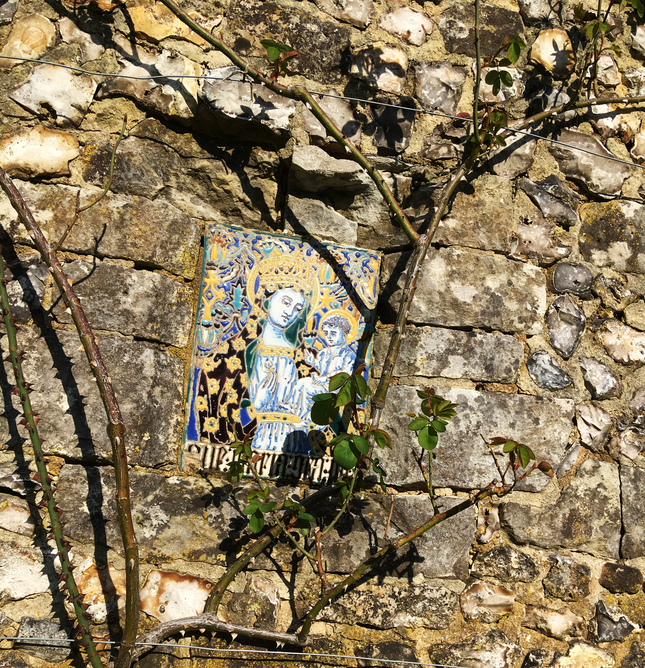 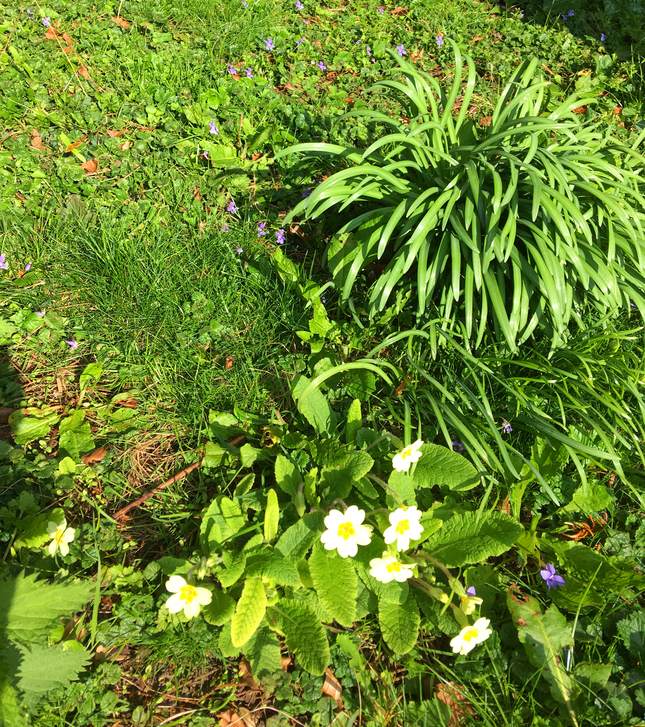 What a perfect place to leave our Jane Austen tour, not by the crashing waves of a seashore holiday, but strolling in the gentle green of a Hampshire garden that Jane herself knew so well and where her spirit is still so present. 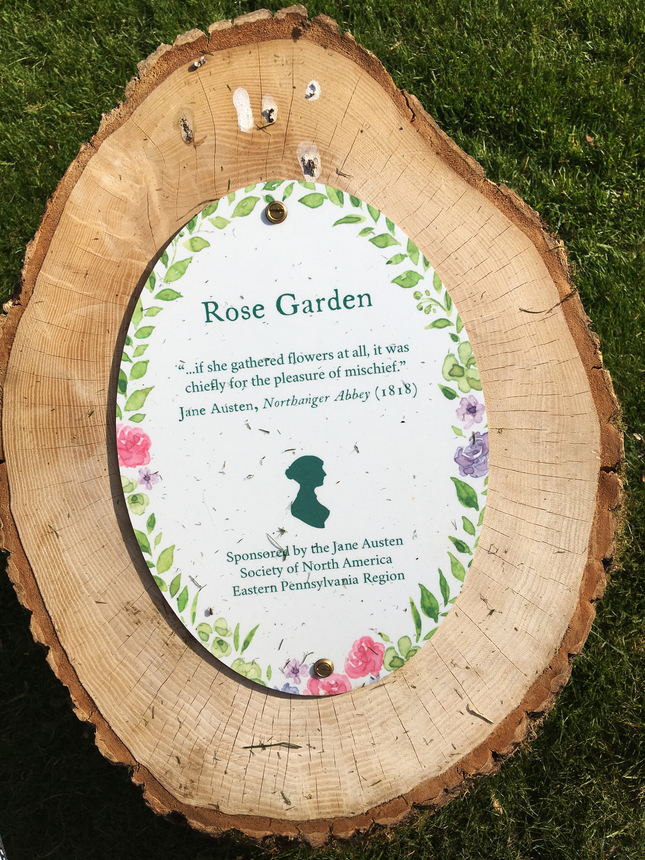 If you have missed any of the earlier posts of this tour of Jane Austen’s Seashore, you can find them all here: We began this series with an overview, then visited Teignmouth,  Dawlish and Sidmouth. We spent 2 weeks in Lyme Regis with Part 1 and Part 2, then Southampton,  Portsmouth, Bognor Regis, Worthing, Brighton,  Ramsgate, and Margate.

My next series, beginning this fall, will be Jane Austen’s Homes, where we will visit her birthplace Steventon, her exile (or was it?) in Bath, Godmersham where she experienced aristocratic living, the Portsmouth years, her return to peace in Chawton, and her final resting place in Winchester. I invite you to follow “The Authorized Version” to be sure you don’t miss any and to subscribe to my newsletter to receive a free book and monthly updates on my garden, free book offers and a fun video.

Ah, what lovely memories this brings back. I am so glad we finally made it there on this year's trip. Had a wonderful time and it looks like you did too!
-Sheila Deeth, August 18, 2019

Thank you for writing Sheila! Yes, Chawton is just all around charming, isn't it? I wish I could get there more often, but I treasure the visits I have managed.
-Donna Crow, August 31, 2019