It’s one of those ironies of history that even though Jane Austen apparently did not like Brighton—she never went there as far as we know, and only bad things happened to her characters who did go there—her writings have enhanced the fame and popularity of this seaside resort.

In 1799 Jane wrote to her sister, “I assure you that I dread the idea of going to Brighton as much as you do, but I am not without hopes that something may happen to prevent it.” (This quotation from the memoir by William Austen Leigh, who suggests Brighton had been recommended to her brother Edward as an alternate to Bath. It should be noted that Deidre Le Faye translates the town as Bookham, although Jane had friends and relatives in Great Bookham and no apparent reason to dislike it. Madame D’arblay, the author Fanny Burney, also lived there and Jane joked to Cassandra that “perhaps I may marry young Mr. D’arblay.”)

Brighton is part of our search for the “real” Sanditon in that Jane herself seems to have eliminated it from the list of contenders when she has Sanditon’s enthusiastic promoter Tom Parker assure Mr. Heywood that Sanditon was not to be one of “your large, overgrown Places, like Brighton. . .”

Brighton figures in both Pride and Prejudice and Mansfield Park as a place suitable only for running amok. Only characters lacking in good judgement, such as Mrs. Bennett and her two younger daughters long to go to Brighton:

“If one could but go to Brighton!” observed Mrs. Bennet.

“A little sea-bathing would set me up forever.”

“And my aunt Phillips is sure it would do me a great deal of good,” added Kitty.

Elizabeth sees the danger when Lydia proposes going to Brighton under the chaperonage of young, newly married Mrs. Forster and argues to her father that at Brighton “the temptations must be greater than at home.”

But in Lydia's “imagination, a visit to Brighton comprised every possibility of earthly happiness. She saw, with the creative eye of fancy, the streets of that gay bathing-place covered with officers.” Lydia won the day. And, as readers around the world well know, indeed, the inevitable ruin came upon Lydia at Brighton.

Thereby, among other disasters, spoiling Kitty’s hopes of ever enjoying this demi-paradise herself: “If I should ever go to Brighton, I would behave better than Lydia.”

“You go to Brighton. I would not trust you so near it as Eastbourne for fifty pounds!” Her sadly wiser father tells her.

Until, that is, Lydia returns a radiant bride—due entirely to Mr. Darcy’s good services. With her typical oblivion to decorum, Lydia declares, “I am sure my sisters must all envy me. I only hope they may have half my good luck. They must all go to Brighton. That is the place to get husbands. What a pity it is, mamma, we did not all go.”

To which her mother wonderfully replies, “Very true; and if I had my will, we should.”

In Mansfield Park Maria Bertram, the newly married Mrs. Rushworth, did not have such a happy ending to her Brighton escapade, although it started out well enough. “The plan of the young couple was to proceed, after a few days, to Brighton, and take a house there for some weeks. Every public place was new to Maria, and Brighton is almost as gay in winter as in summer.”

To be fair, Maria and Henry Crawford elope from London, not Brighton, but the implication is clear that such a resort is to be enjoyed by people of shallow judgement.

It is interesting to note that in her method of including Brighton in both of her novels Austen is being true her advice to her niece Anna Lefroy who wanted her characters to go to a place she had never visited. Let your characters go, Jane advised, but "you had better not go with them." Austen never takes her readers to Brighton, she merely tells us that the characters went there.

It is likely that Jane Austen’s evaluation of Brighton was colored by her disapproval of the profligate Prince Regent who had chosen Brighton for his pleasure palace. Jane’s reluctance to dedicate Emma to the Prince Regent is well-known.

The Prince’s uncle, the Duke of Cumberland, first made Brighton fashionable. His tastes for fine cuisine, gambling, the theatre, and general fast living were shared by the young Prince George who stayed with him. 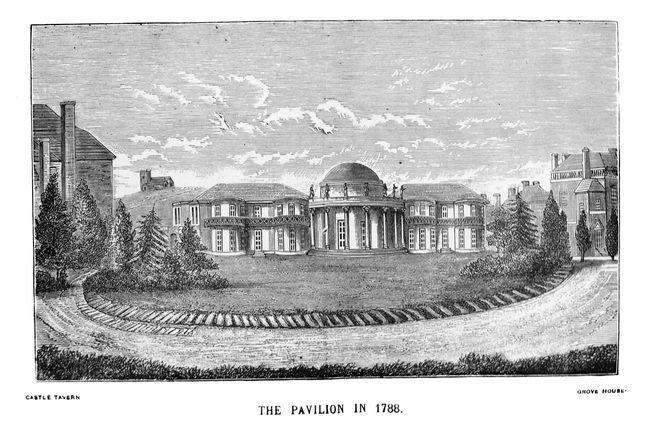 Later the Prince of Wales was advised by his physician that the seawater and fresh air would be beneficial for his gout. He rented a farmhouse in the Old Steyne, a grassy promenade area. It probably looked about like the above picture from the archives of the Brighton Toy Museum. From such modest beginnings the prince continued to build and expand until what we know today as The Royal Pavilion was completed in 1822.

In Jane’s day only the grand riding school and stables, built in the iconic “Indian” style and much dwarfing the prince’s Marine Pavilion house, existed as we know it now. The new stable complex was completed in 1808 with an impressive lead and glass-domed roof, providing stabling for 62 horses. It is now used as a concert hall.

Of supreme interest to the younger Bennett girls, of course, was the regimental encampment at Brighton to which George Wickham and the officers from Meryton were sent. The Church Street Barracks near the Pavilion were thrown up quickly during the wars with Bonaparte, but  apparently, judging by Lydia’s daydream, the majority were encamped in tents on the downs: “its tents stretched forth in beauteous uniformity of lines, crowded with the young and the gay, and dazzling with scarlet”.

Although sea-bathing was offered, Brighton’s beach is pebbly, unlike the “fine hard sand” Mr. Parker promised bathers at Sanditon.

The first pleasure pier—the Royal Suspension Chain Pier—wasn’t built until 1823, the West Pier not until 1866. Both of those ill-fated structures succumbed to the ravages of storm and fire. The Brighton Pier built in 1899, however, still offers a variety of carnival rides, games, live performances, and excellent fish and chips. The pier is promoted for family entertainment, but none of its offerings would be likely to attract Jane Austen, had they existed in her day. (Photo credit) 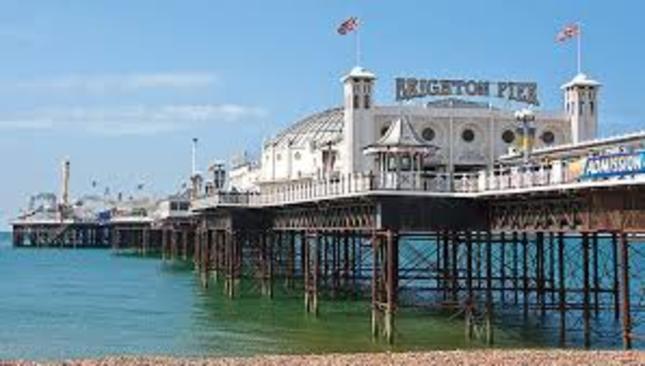 It is ironic, then, that Brighton today exerts such a pull to so many Janeites, and yet, few places other than Bath still manage to exude such a Regency ambiance. An ambiance I readily succumbed to when I happened on the Duke of Wellington’s Dancers practicing for an event to be held in the Pavilion. Nothing could have given me a greater sense of having stepped back into Jane’s time.

Next week we visit another of Jane Austen’s least favorite resorts—Ramsgate.  We began this series with an overview, then visited Teignmouth,  Dawlish and Sidmouth. We spent 2 weeks in Lyme Regis with Part 1 and Part 2, then Southampton,  Portsmouth, Bognor Regis and Worthing. Please return each week as we continue eastward to Ramsgate, and finally, move inland to Chawton.