All Jane Austen’s devoted fans want to know more about her and what she looked like. Little wonder then, that there has been so much interest—and controversy—created by newly emerged portraits declared to be authentically Austen.

We have 2 undisputed likenesses done by her sister Cassandra. The most familiar shows the beloved author with a rather off-putting scowl. It does, however, show the “bright hazel eyes, and brown hair forming natural curls close round her face,” which her nephew James Edward Austen-Leigh recalls in his memoir of her. 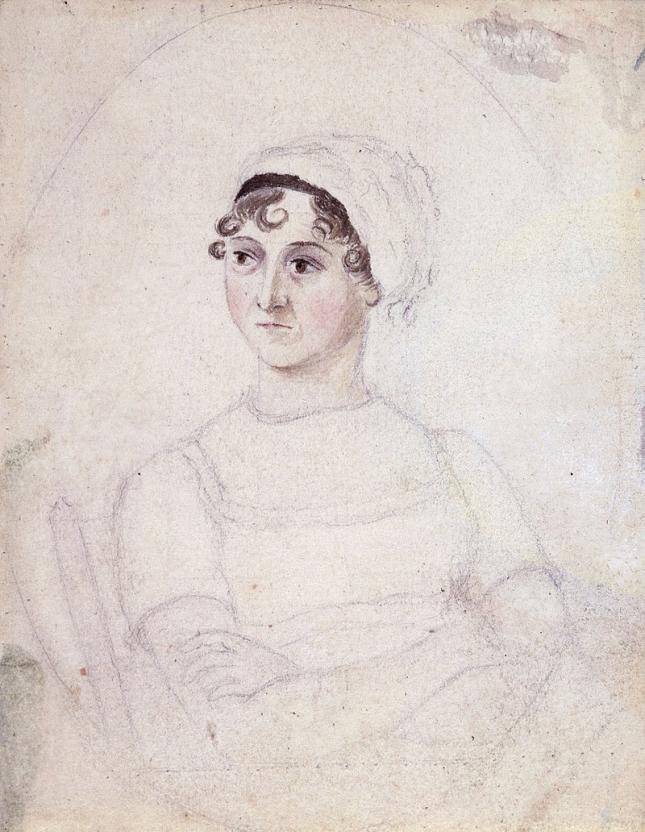 The other is a lovely sketch of her back. 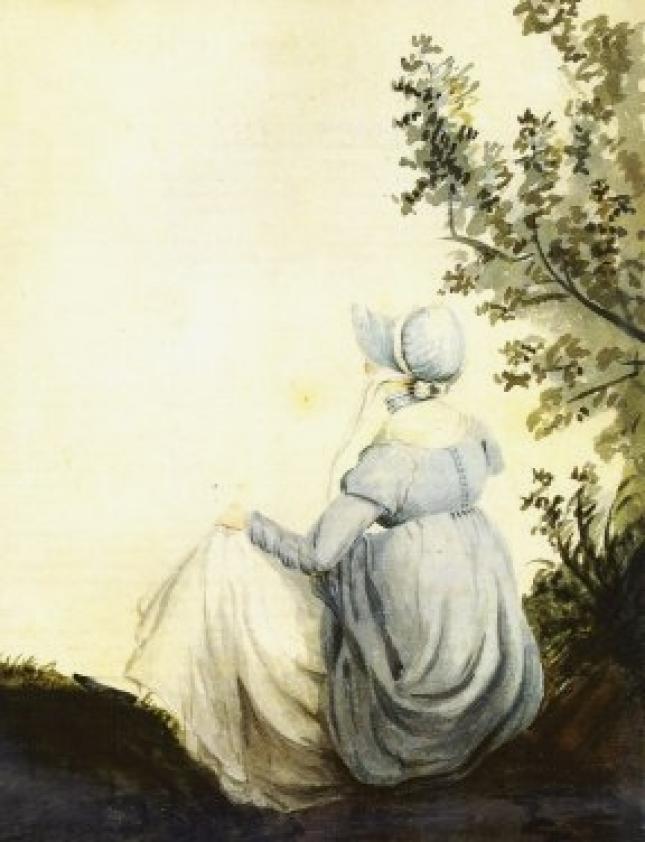 Hence the excitement when a more revealing, or more attractive, candidate surfaces.

I decided to get in on the fun when I was asked to present my talk on “Jane Austen in London with the Dashwoods” for the Jane Austen Society of North America Annual General Meeting in Victoria, BC. I would do it in the persona of Jane Austen, I decided. Better yet, I would wear a replica of a Jane Austen outfit. 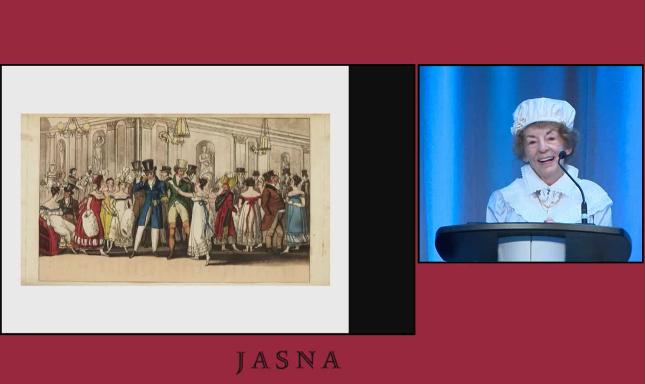 I was thinking of the simple blue frock in Cassandra’s sketch, but my historic dressmaker extraordinaire Tamara Mackenthuen convinced me that we should use the depiction known as the Byrne portrait, for the writer Paula Byrne who owns it, as our model. I gulped at the rather forbidding countenance presented by this disputed portrait.

Let me digress for a moment to weigh in on the controversy. I believe this is, indeed, a portrait of Jane Austen. She has the fine eyes Jane was known for and the prominent nose known to be a distinguishing Austen feature—of which Mrs. Austen was so very proud.

Also, Jane, who spent an appreciable amount of time in London in her later years, had an acquaintance—Eliza Chute—who was an amateur artist and whose home, indeed, had a view of St. Margaret’s Westminster. 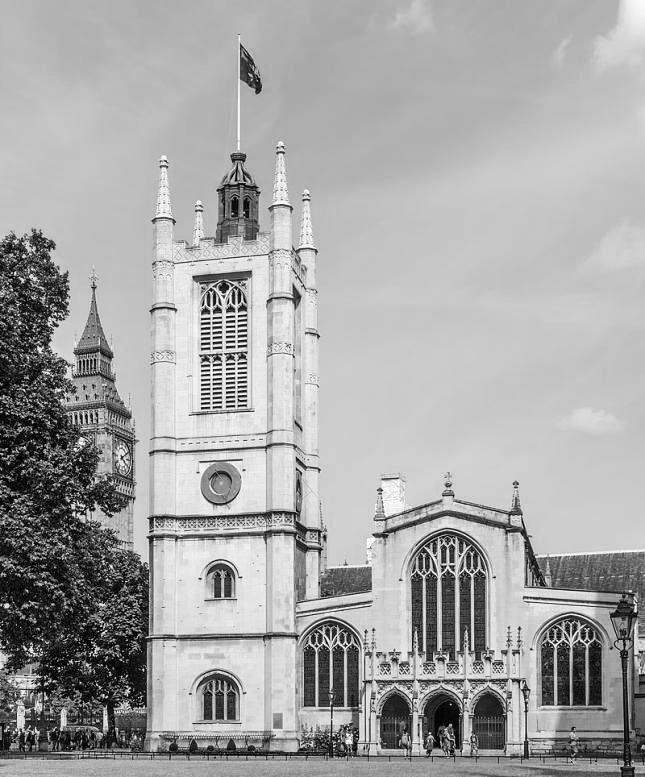 A key phrase in the controversy, however, is “done from life.” The convincing factor for me, after having "lived" the portrait, was the amazing amount of detail in the likeness. Tamara and I spent a staggering amount of time enlarging the image and scrutinizing every pencil line to capture the tiniest clues. Just trying to reproduce the multi-layered necklace told me the artist was looking at a real object—such specific detail did not come from her imagination.

That issue settled in my mind, I return to my attire. At last, we had them assembled: gown, high-collared chemisette, lace collar, hat, necklace, stole...

But wait—my granddaughter was to join me at the ball. What should she wear? Ah, the Rice portrait. In this case, the nay-sayers are correct, a young Jane Austen did not serve as model for this lovely picture—as much as we would like to think it could be her. At the time these dress and hair styles were in fashion Jane would have been in her late 20s—hardly the 10-year-old girl depicted. 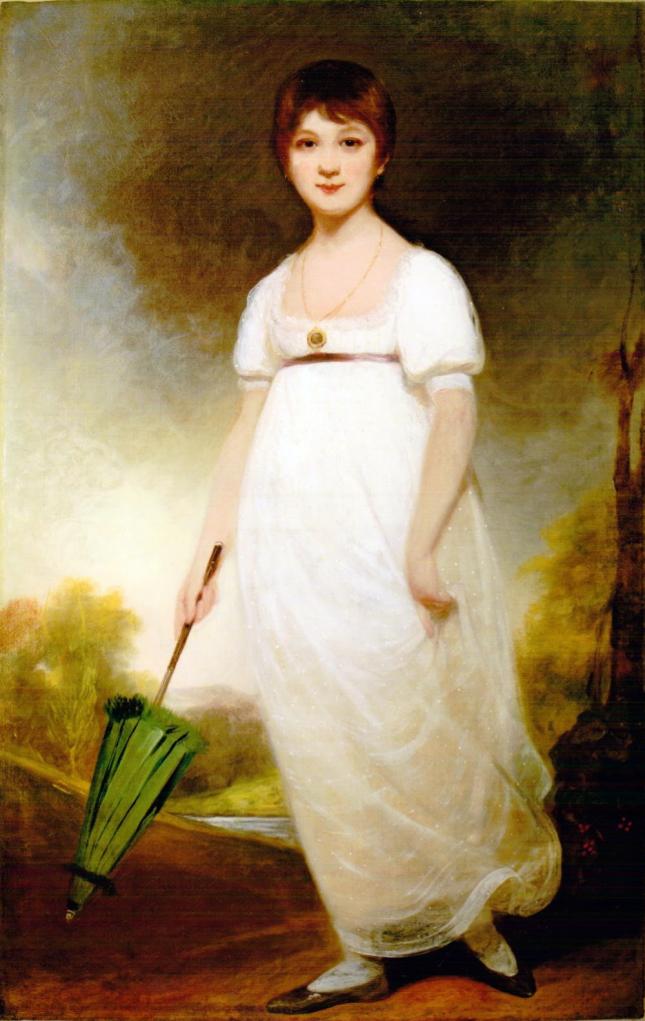 But my granddaughter is, indeed, 10 years old and the style is perfect for her. She even has a matching necklace from her great grandmother—my mother, who rather resembled Austen in the Byrne portrait. And we found a green parasol to complete the presentation.

The event was a great success. I will admit to enjoying thoroughly being address as “Jane Austen” when asked to dance. And, I’m delighted to report, my granddaughter and I saw the evening out in best Austen style by dancing every dance.

For more presentations by "Jane Austen", sharing her experiences in Portsmouth and Lyme and explaining how they affect her her writing, click here.

For a complete blog tour following Jane Austen at the Seashore, start here.

Thank you for stopping by, Mary! As you can tell, I had great fun at the conference and I love sharing the experience with my readers.
-Donna, November 5, 2022