One of the wonderful things about being a lover of all things Jane Austen is that she can be appreciated on so many levels.

There are the scholarly academic speeches and publications from which we all can learn so much fascinating information. And there are the charming tea parties, picnics, and Regency balls for which Janeites delight in dressing up in full Regency regalia. There are movies, cartoons, and endless spin-off adaptations, including two of my Elizabeth and Richard Literary Suspense novels. And there are also board games, jigsaw puzzles and a delightful array of memorabilia to collect, to decorate one’s office with—and to play with in brief moments of relaxation.

My first acquisition was this “Secular Saints” candle which a friend gave me, standing here in front of Wells Cathedral. 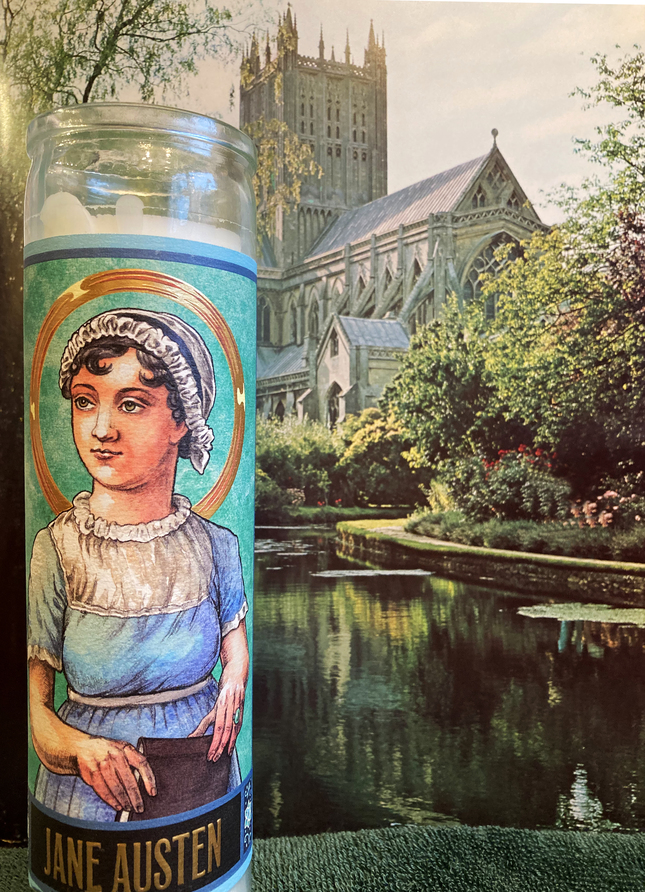 The candle ascribes “Saint” Jane as the patron of poor relations, hidden greatness and the anonymous. Her Saints day is December 16, the day of her death in 1817. It references her strength and grace to “withstand a world that misunderstands genius.” I especially like the request that we might “equally persevere when acclaim is long delayed,” and in our own obscurity we might have “equal parts wit and empathy, cynicism and compassion.” The meditation ends with an appropriately cynical quotation from Jane herself that we might “make sport for our neighbours, and laugh at them in our turn.”

I was next given this Jane Austen soft ornament. 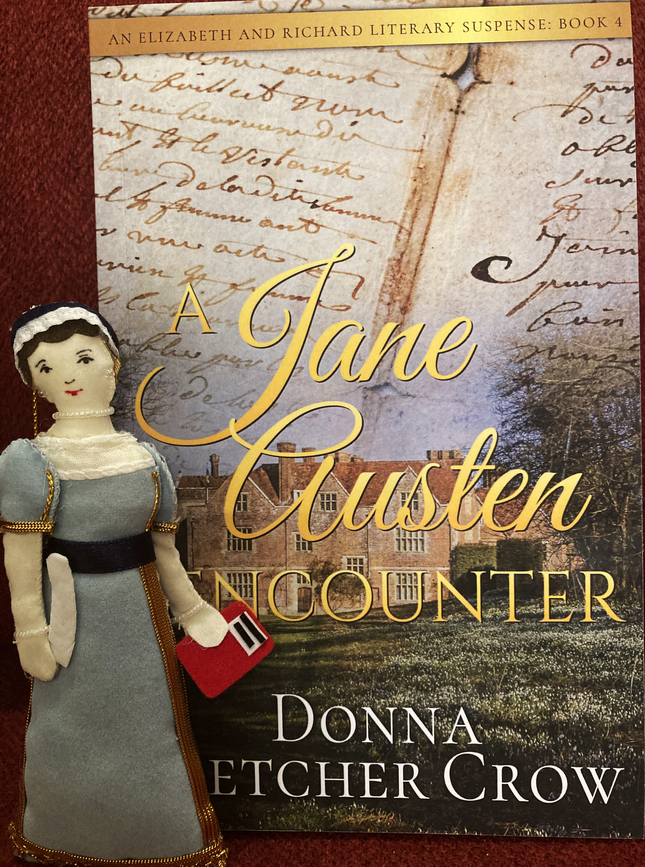 It usually hangs beside my computer as an unfailing source of inspiration—and reminder to keep at my work. Jane Austen never quit. She wrote a comic poem the day before she died. But today she was able to visit my Jane Austen Encounter, which pictures her brother’s home Chawton House on the cover, and where both of my Austen titles have been added to their library.

Across my office from Jane hang my soft ornaments of perhaps her most memorable characters, Elizabeth Bennett and Mr. Darcy. 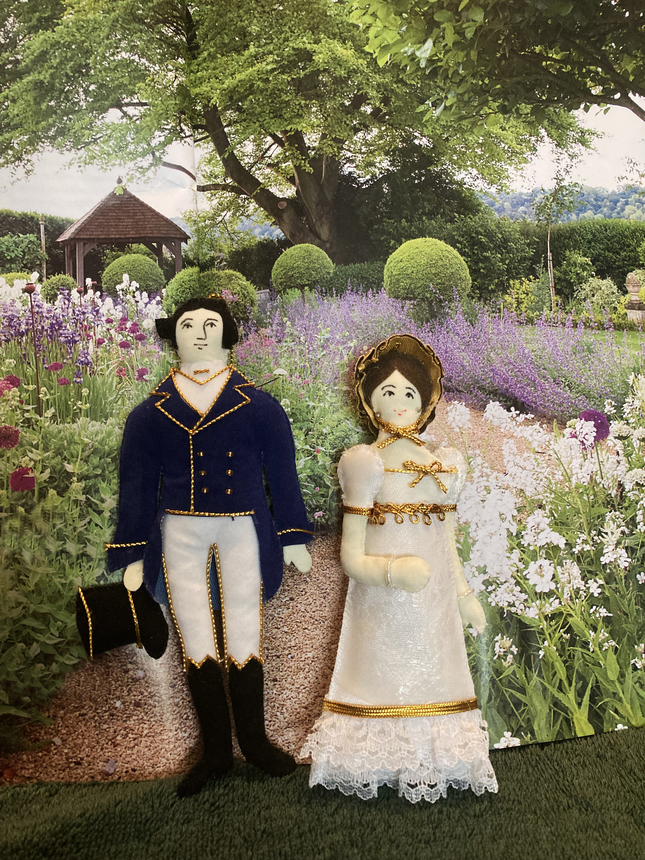 Here I have the newly wed Mr. and Mrs. Fitzwilliam Darcy walking in an English garden.

One of the fun features of every JASNA (Jane Austen Society of North America) AGM is the marketplace where I have acquired several treasures over the years. First, a block of UK stamps honoring Jane Austen which the Royal Mail first issued in 1975 to mark the bicentenary of Austen’s birth, artwork by Barbara G. Brown.

The panel shows: Mr. Darcy, Emma with Mr. Woodhouse, Mary and Henry Crawford, and Catherine Morland—interesting choices, I think. I added the pillar box, which wasn’t introduced by the Royal Mail until mid-Victorian times.

In 2017, the bicentenary of Austen’s death, I acquired two items that are more than just collectables. 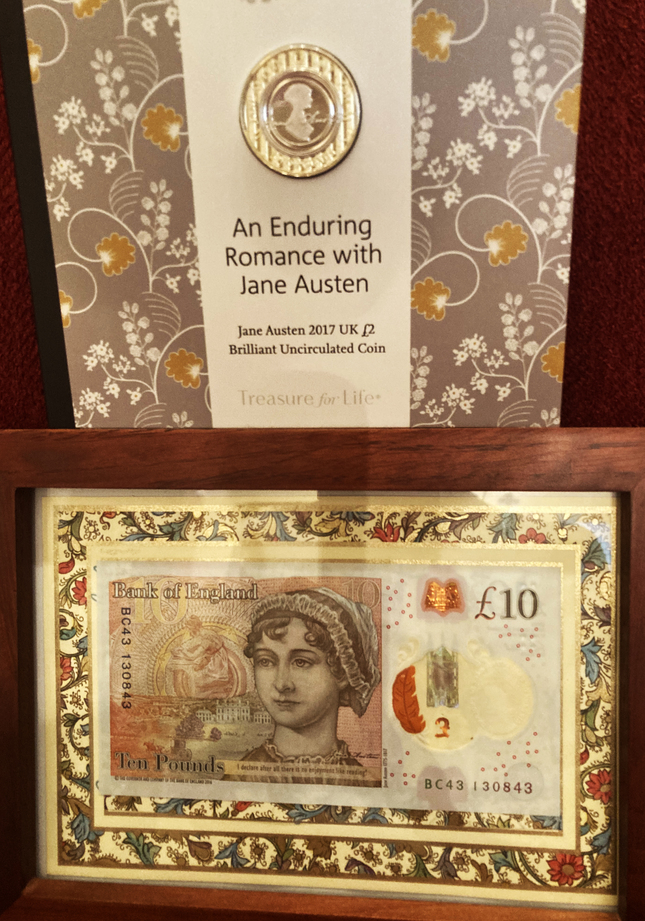 That year The Royal Mint issued a £2 coin, designed by graphics artist Dominique Evans which features Jane’s profile and signature at the center of the coin. 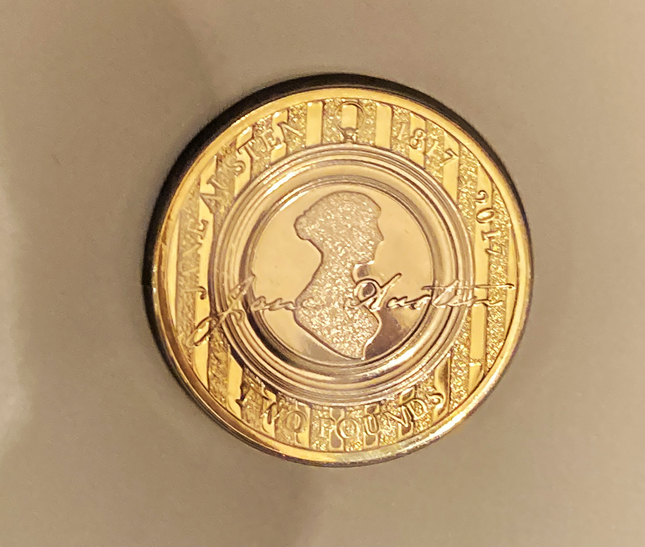 Evans said, “She is such a fundamental part of literary history that I felt it appropriate to have her at the heart of the design, maintaining an air of simplicity and the grace she deserves.” Equally gracious, Her Majesty, Queen Elizabeth II is on the other side. 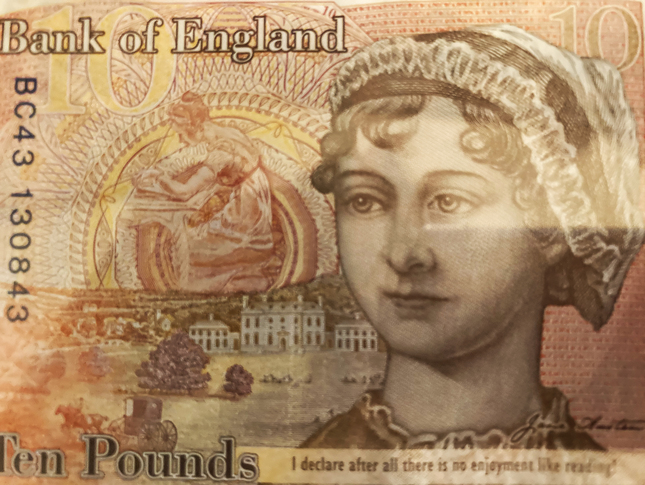 Also in 2017, The Bank of England issued their famous Ten Pound note, featuring an engraving of Jane Austen, based on the famous sketch her sister Cassandra made of her. Below her picture is the seemingly appropriate quotation from Pride and Prejudice: “I declare after all there is no enjoyment like reading!” Appropriate, indeed, until you realize the line was spoken by that most cynical of creatures, Caroline Bingley. Jane is no doubt relishing the irony.

My favorite stocking stuffers from the Unemployed Philosophers Guild, Riffing on Jan Austen's delicious wit. Pride and Peppermints: The peppermints which have only genius, wit and taste to recommend them; and Suds and Sensibility bath soap: It is a truth universally acknowledged, that anyone in possession of good hygiene must be in want of a soap. 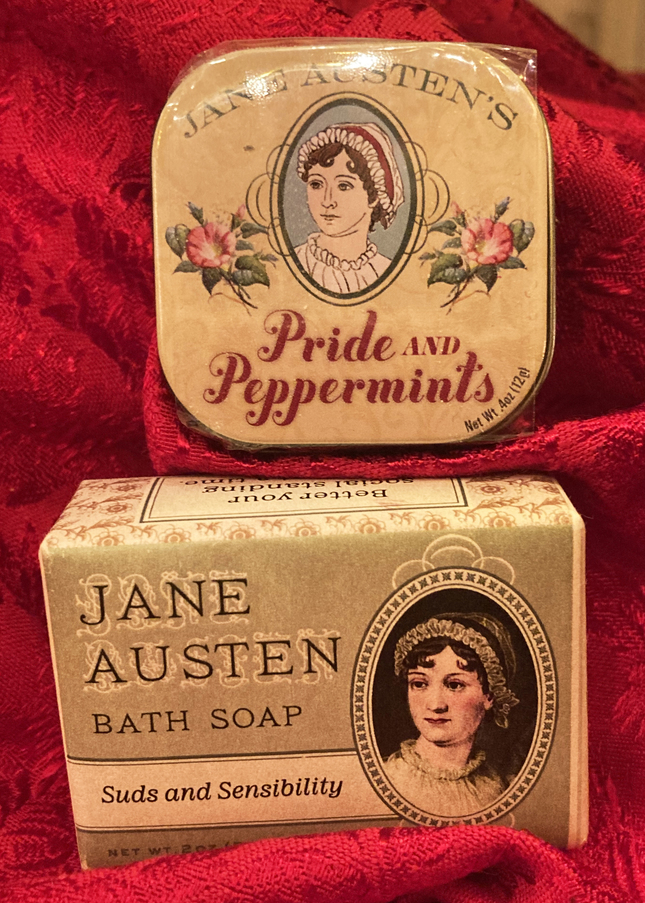 Finally, My most recent acquisition, which prompted this blog, was a Christmas present from our son and his wife—my Jane Austen Action figure—complete with book and quill and its own stand-up background. 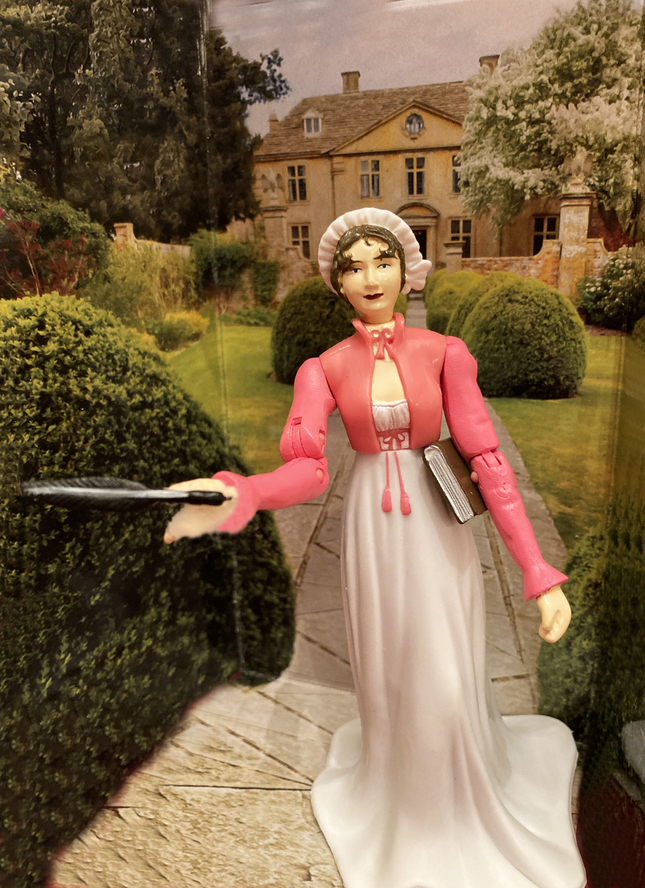 As the box says on the back, “Jane Austen’s novels explore the timeless truths about what it means to be human…her insight, sharp observations and humor made her books an essential part of the body of literature…” 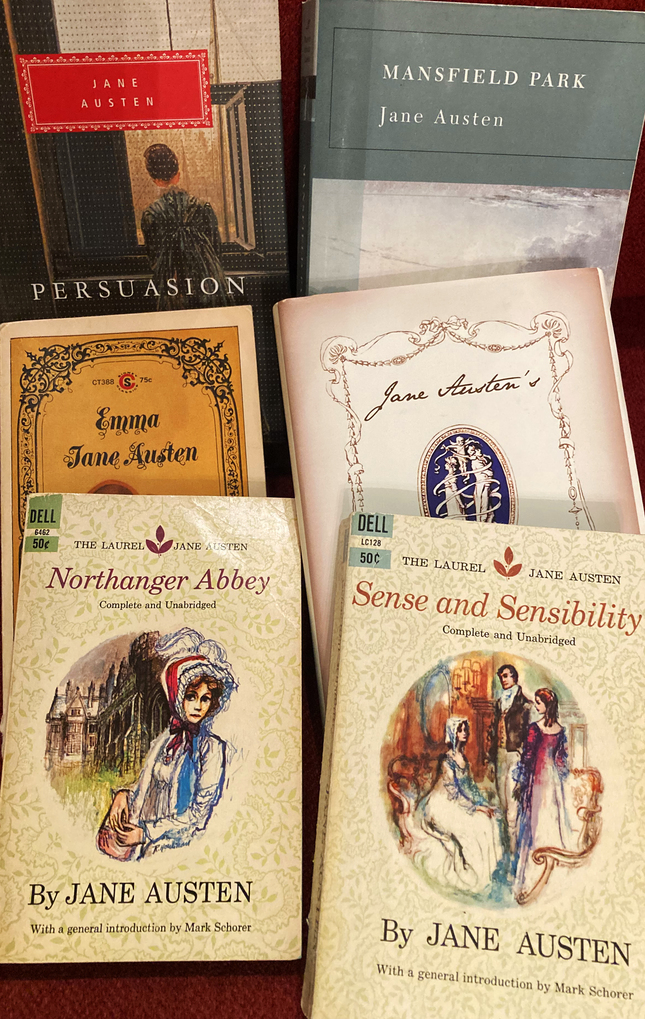 Ah, essential, indeed. And at the end of the day, as much fun as all my toys are, nothing can give more pleasure than Jane’s books themselves. It seems Caroline Bingley was right after all.