The Blue Train: Paris to the Riviera with Elegance and Murder 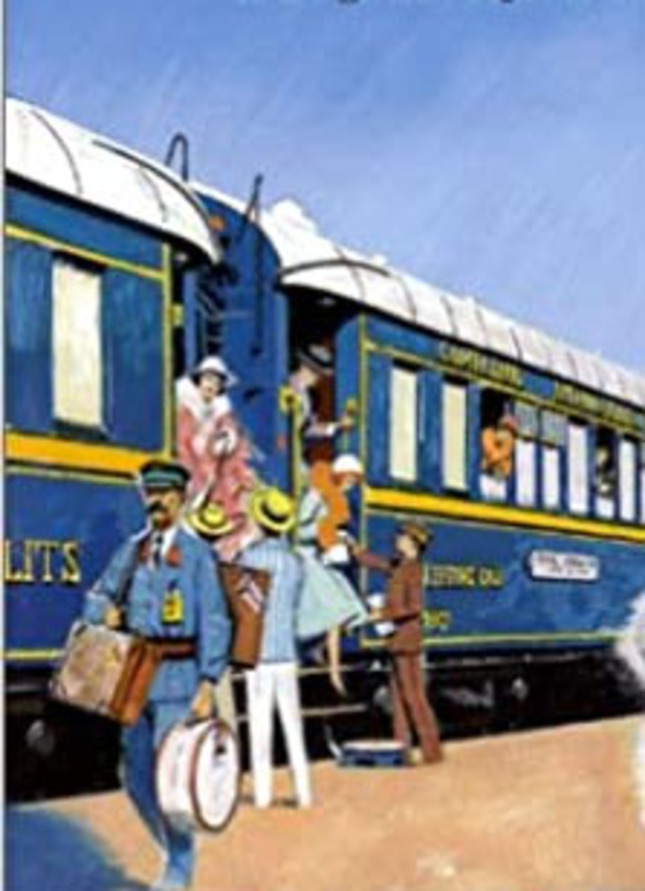 Originated by the same company that started The Orient Express, The Blue Train—which got its name from the color of its sleeper cars, not from the fact that it connected to the Côte d’Azur, as I had thought—has had a long and checkered career, interrupted by wars and economic changes, but it remains a symbol of elegance and luxury, and its name conjures images of the epitome of opulent travel.

My first glimpse of this extravagant world was watching the movie “Mr. Bean’s Holiday” and groaning over his painfully inept experiences of dining in the most extraordinary restaurant I had ever seen.

Was this place real? In a railway station? Could normal people actually eat there?

When our train connection from the Riviera to the luscious Loire Valley took us to the Gare de Lyon in Paris, I found that the answer to all the above questions is a resounding “Yes!” (Those readers who have been following this blog series know that my daughter-in-law and I were escorting my granddaughter from a summer dance program in Monaco back to her school in Basel—now on our way to a brief stopover for a wine country tour.) 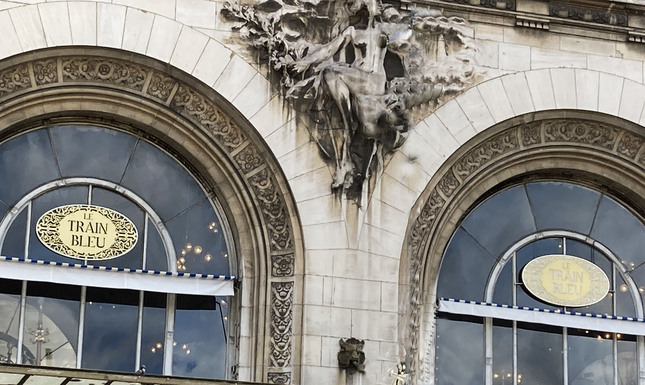 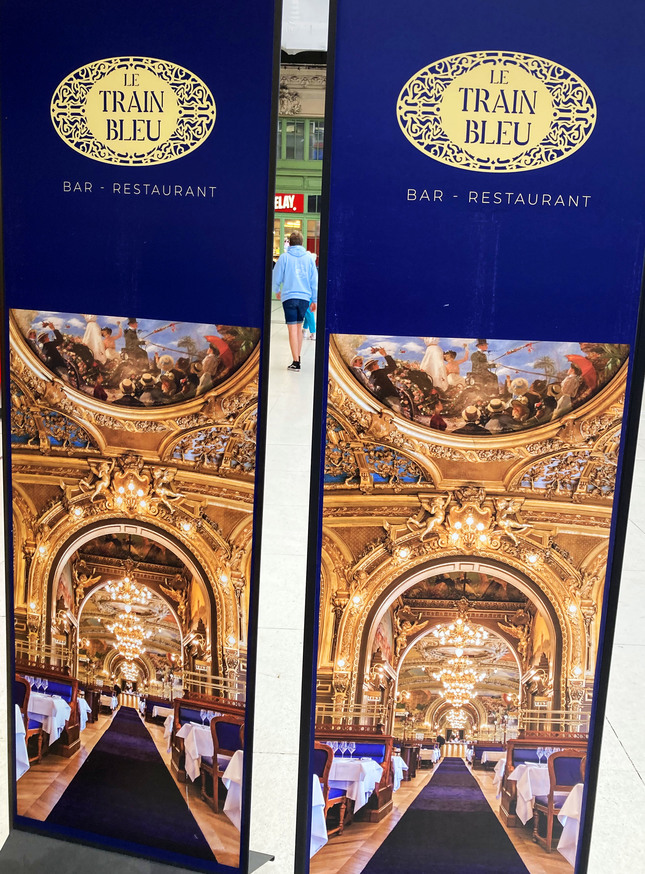 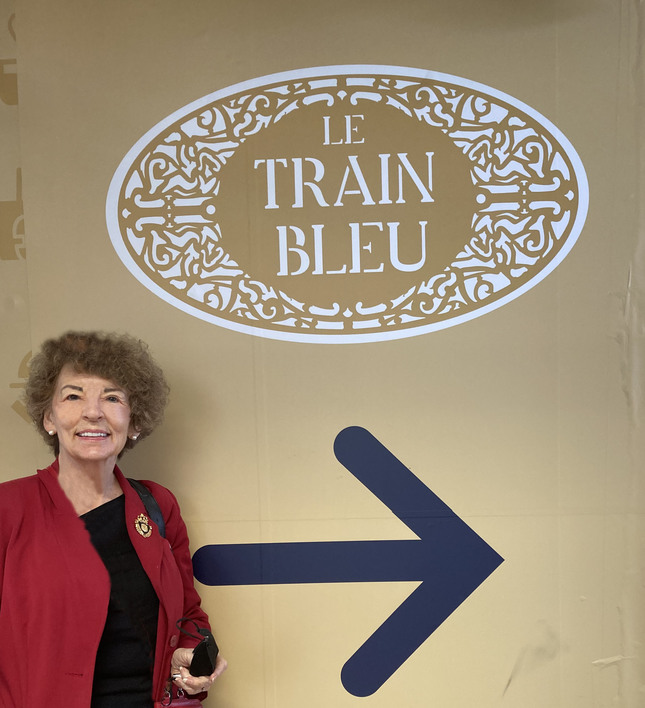 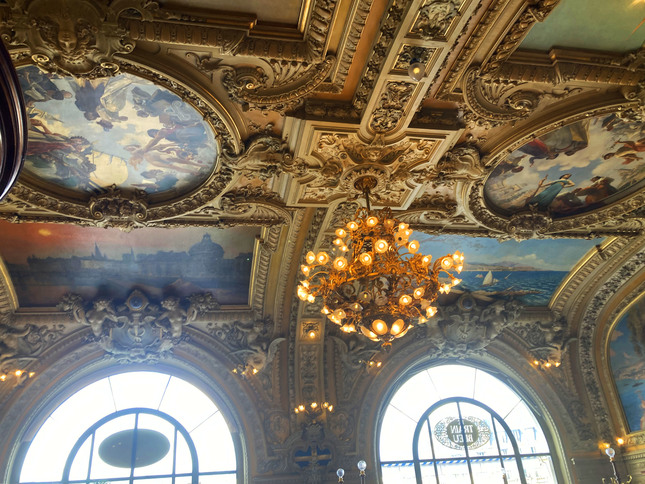 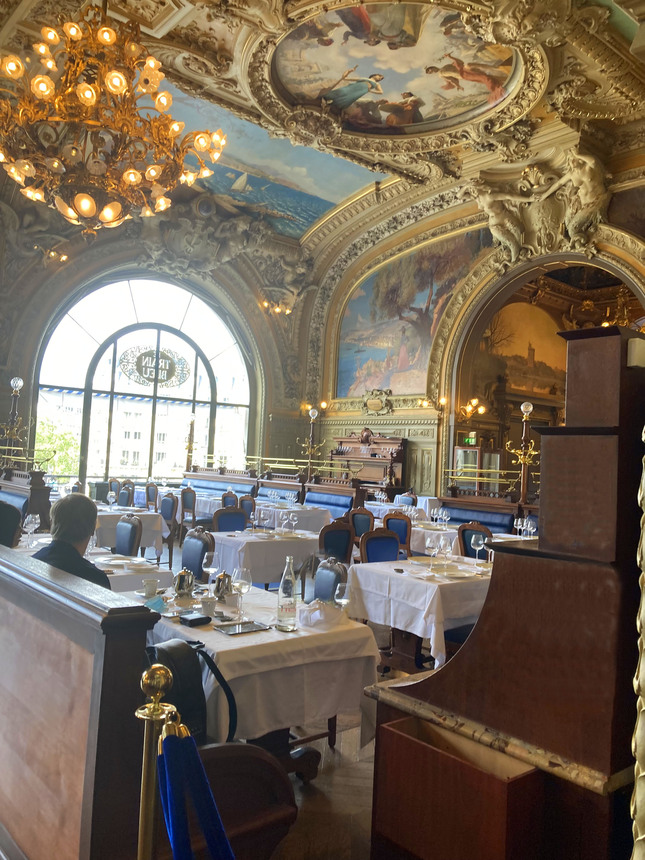 And here, in all its gilded glory was the very dining room where Mr. Bean encountered oysters and langostino. (I still can’t watch the clip without laughing out loud.) In 1963, this belle-epoque restaurant at the Gare de Lyon train station in Paris was renamed Le Train Bleu to honor the historic train. 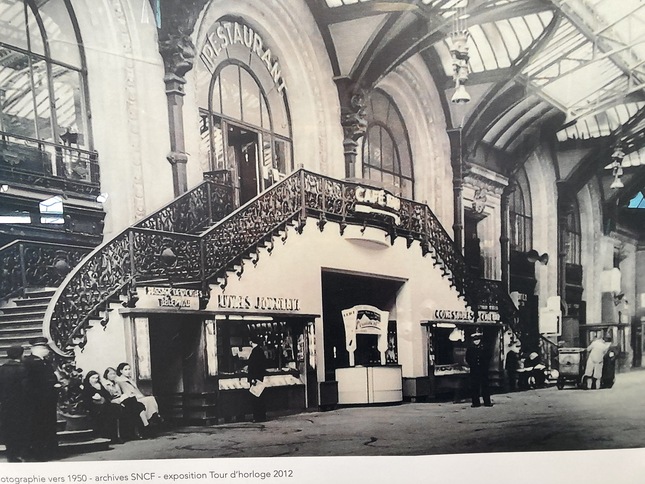 The mystique of The Blue Train was irresistible for several Golden Age mystery writers—perhaps drawn to the contrast between such refinement and the brutality of murder. 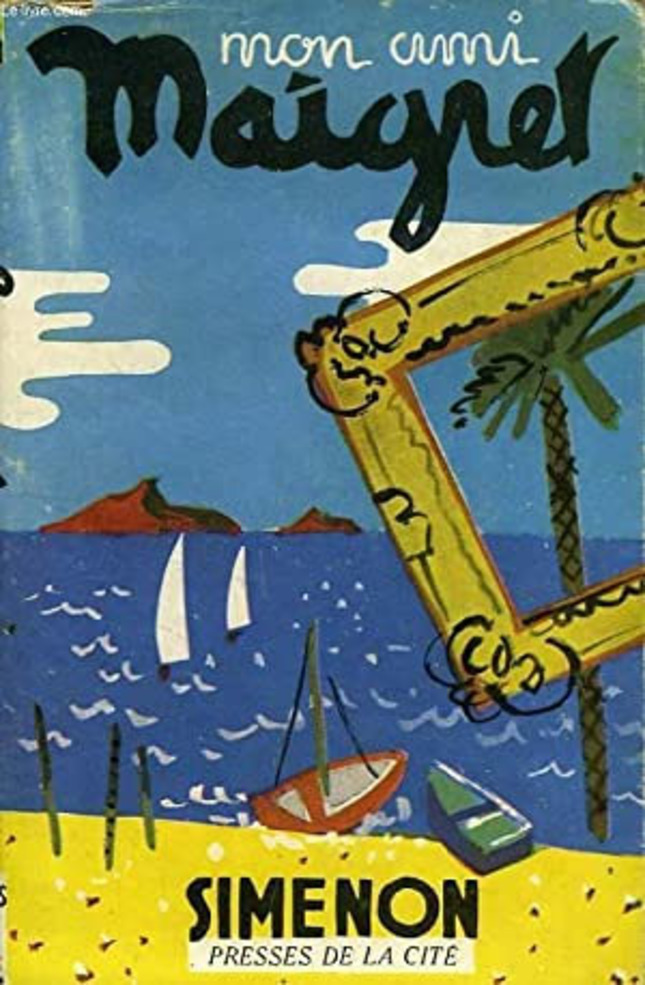 In Georges Simenon’s 1949 novel My Friend Maigret, Inspector Maigret is told that the mysterious death of an old fisherman on the Riviera will require his going to the south of France. Maigret looked at the Seine, outside, through the curtain of rain and thought of the Mediterranean sun.

Later that day he buys the fares for himself and a visiting Scotland Yard inspector. Alone, he would have settled for a couchette. At the Gare de Lyon, he hesitated. Then, at the last minute, he took two berths in a sleeping compartment. It was magnificent. In the corridor they met very wealthy travellers with impressive luggage. An elegant crowd, laden with flowers, was accompanying a film star to the train. “It’s the Blue Train,” Maigret murmured, as if by way of apology.

On the train, Maigret and the Englishman discuss their destination. Maigret says, “I don’t really know the South. I was on a case once in Antibes and Cannes, and what I remember most is oppressive heat and an unshakeable desire to sleep.”

“Basically I don’t like places where I lose the taste for work.”

The next morning, they arrive at the Riviera to see the sunrise over one of the most beautiful landscapes in the world. And they disembark to find the palm trees around the railway station … motionless, fixed in a Saharan sun. 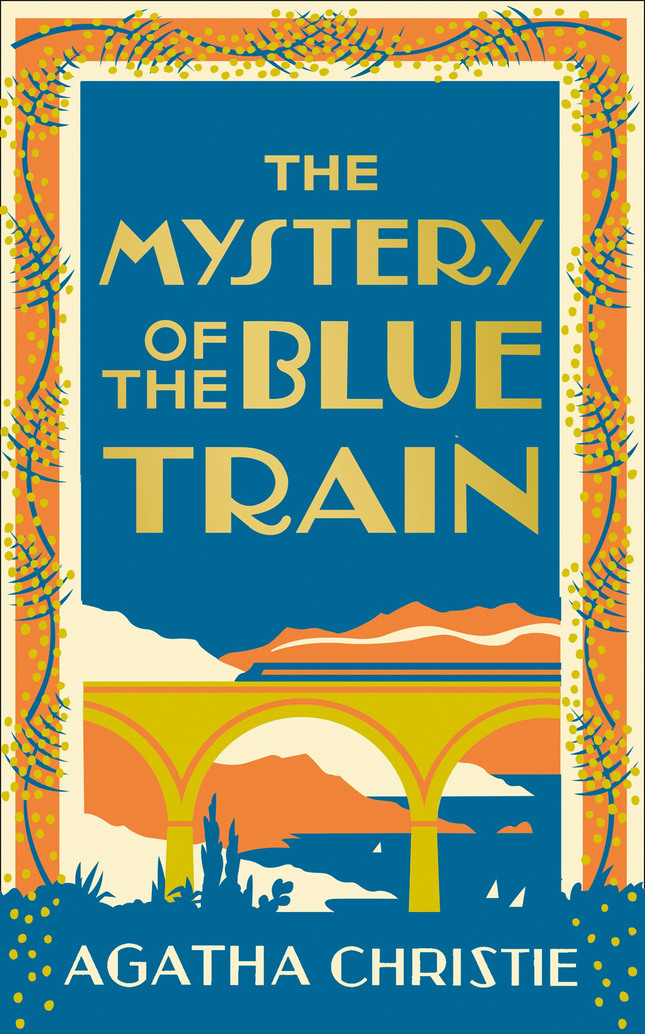 Maigret’s journey on the Blue Train was uneventful, but for Hercule Poirot his disturbed night on the train provided the basis for the entire Mystery of the Blue Train. (Those who read my previous blog on the Hotel Negresco will realize my blogs present Agatha Christie’s plot backward.)

First to book train passage for the Riviera is the questionable Dereck: “What is the best train?”

“Well, of course, the best train is what they call ‘The Blue Train.’

The principal characters, including of course, Hercule Poirot, are gathered on the Blue Train. The next morning, one of them is found dead in her compartment. Poirot questions the conductor who, wringing his hands, moans piteously. “Such an affair to happen on the Blue Train! It is horrible.”

The very fact of having been on the train becomes a clue to the mystery as one character tells another, “I saw you on the Blue Train.”

“On the Blue Train!” Something undefinable came over his manner; she could not have said just what it was. It was as though he had received a check, a setback.

And suspects pile up as it transpires that more miscreants had been on that fateful train passage. And even more misdeeds committed. How fortunate that Hercule Poirot was also on The Blue Train. 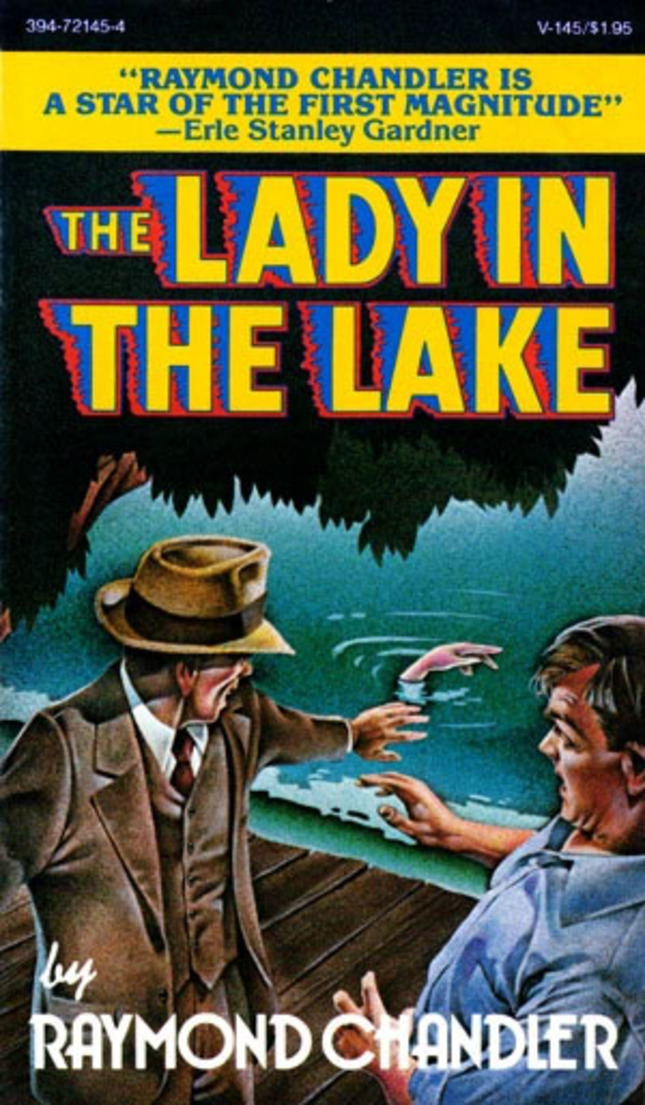 Even the hard-bitten writer Raymond Chandler couldn’t resist inserting a genteel interlude into his novel The Lady in the Lake. In this one paragraph Marlowe gives a vivid summary of the iconic train and its exotic setting based on the original poster. 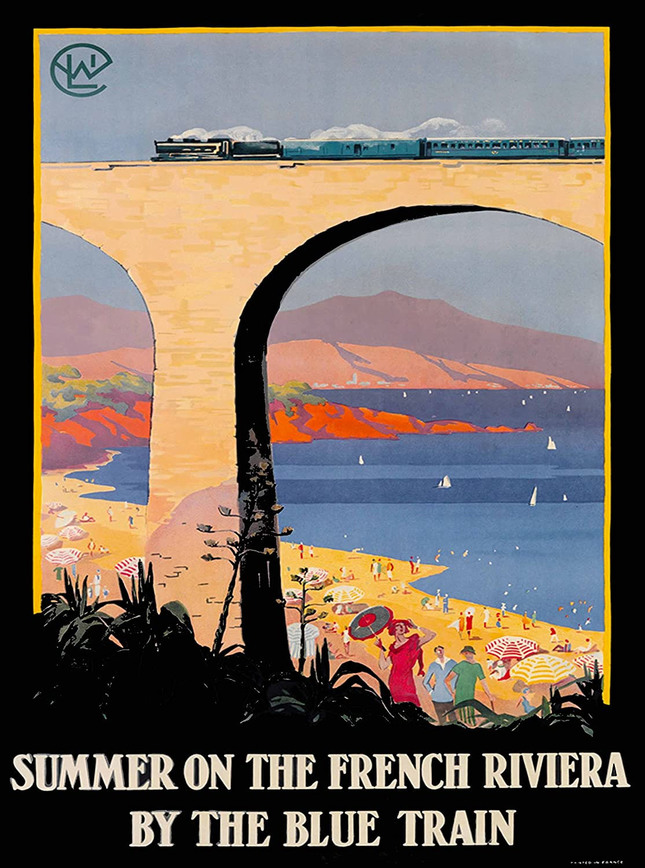 Philip Marlowe has been brutally beaten (not for the first, nor for the last time). When he comes to:

I smelled of gin. Not just casually, as if I had taken four or five drinks of a winter morning to get out of bed on, but as if the Pacific Ocean was pure gin and I had nosedived off the boat deck. …  I smelled like dead toads. … I was lying flat on my back … on somebody’s carpet and I was looking at a framed picture. [There was]… an enormously high pale yellow viaduct across which a shiny black locomotive was dragging a Prussian blue train. Through one lofty arch of the viaduct a wide yellow beach showed and was dotted with sprawled bathers and striped beach umbrellas. Three girls walked close up, with paper parasols, one girl in cerise, one in pale blue, one in green. Beyond the beach a curving bay was bluer than any bay has any right to be. It was drenched with sunshine and flecked and dotted with arching white sails. Beyond the inland curve of the bay three ranges of hills rose in three precisely opposed colors; gold and terra cotta and lavender. Across the bottom of the picture was printed in large capitals SEE THE FRENCH RIVIERA BY THE BLUE TRAIN. It was a fine time to bring that up. I reached up wearily and felt the back of my head. It felt pulpy. A shoot of pain from the touch went clear to the soles of my feet. …

Heavy feet came along the hallway and there was a hard mutter of voices. The feet stopped. A hard fist knocked on the door. …

The steps went away. I wondered how long it would take to get the manager with a pass key. Not very long.

Not nearly long enough for Marlowe to get home from the French Riviera.

As far as I know, Marlowe never made it to the Riviera—on the Blue Train or any other way—but the good news is, that after the train was discontinued in 2017 for cost reasons, Le Train Bleu has been revived.

A report from May of this year announced: “The legendary sleeper train that whisked travellers through France to the Mediterranean for close to a century has returned to the tracks as part of a French government push to revive night train travel.”

It continued, “The rehabilitation of the successor to the Blue Train that beat the Orient Express for glamour in the heyday of European rail travel in the early 1900s marks a turning point in the country that pioneered high-speed TGV rail travel.” 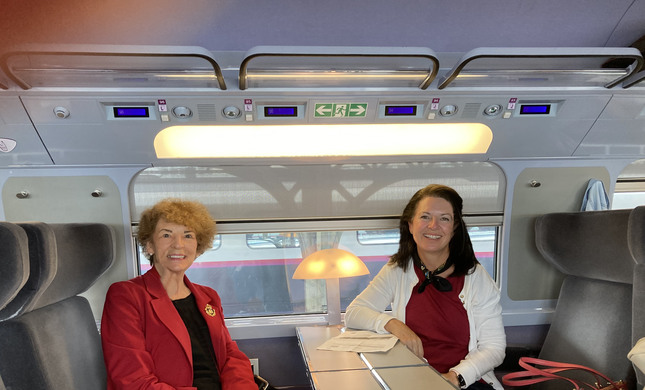 It seems that France is investing heavily in overnight train travel in an effort to reduce carbon emissions. How wonderful that old world elegance and eco-friendly efficiency can come together. Our Paris-Riviera transport was the less romantic TGV, but now I have another item for my Bucket List.

And in the meantime, I am happy to report that Striped beach umbrellas and wide blue bays still live on the Côte d’Azur. 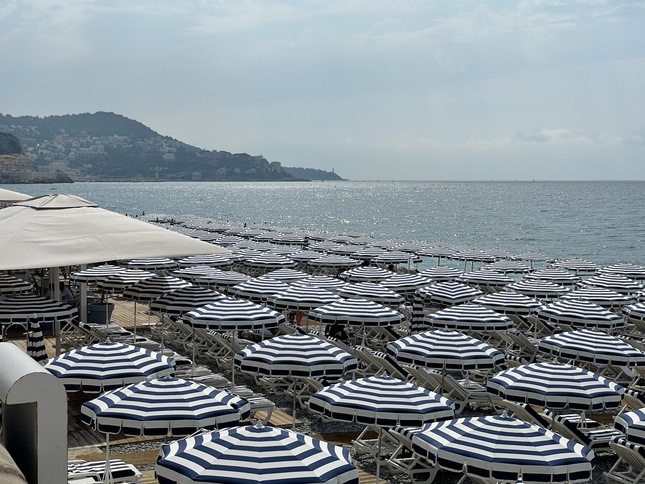 Ah, I wish I could have traveled with you, and with a suitcase full of appropriate books to read along the way!
-Sheila Deeth, October 7, 2021

Oh, yes, my friends had set me up with a great reading list ahead of time, including: The bonjour Effect, Paris to the Moon, and A Week in Paris. I also just finished All the Light We Cannot See--a truly remarkable book!
-Donna, October 8, 2021