Stars in the Manger, A Regency Christmas Short Story 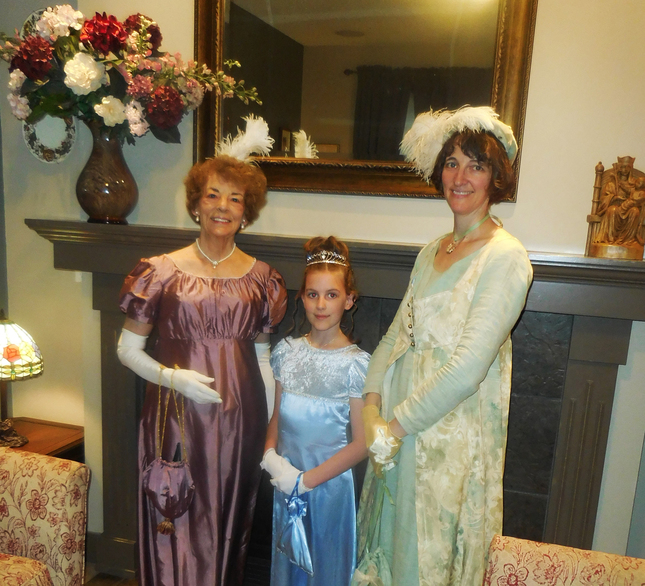 The Christmas preparations at Badminton house were complete to a shade. Georgiana had seen to that: The Christmas pudding well-stirred, the three-tier kissing bough hanging in the center of the ballroom, the yule log ready to set ablaze...

If only she could finish this one last task. She had already ruined several sheets of her mother’s best writing parchment with cross-outs and ink splotches. All the Beaufort children had composed Christmas wishes for family members since they could first hold a pen. Why should this one for her cousin be any different?

A Christmas prayer I wish for you,
Of peace and joy the whole year through;
Of laughter, love, and much content,
That all may be from Heaven sent.

She read it over once more and sighed. It seemed to be the best she could do. Perhaps her mother, working intently at her escritoire across the room, could advise her.

“Mama,” Georgiana began, then caught her breath when her mother turned to her. “What is it?” All plans to discuss her confused feelings for her disconcerting cousin Granville fled at Georgiana’s concern for her mother.

The Duchess of Beaufort sighed. “I am fearful I shall have to abandon my scheme for building my chapel in Wales. The subscriptions have fallen off shockingly. I don’t know what to do. One doesn't want to be in a position of actu­ally begging from one’s friends, and yet I did have my heart set on the chapel. So many people in Wales are without spiritual guidance.”

“But what of the local vicar?” Georgiana asked.

“Alas, it is a plural living. The vicar is there no more than three times a year and the curate is idle. I had hoped to supply the district with a young man of energy and vision.” She picked up a note from the pile in front of her. “‘Lord Berry regrets that circumstances do not allow him to renew his subscription.”’

The duchess shook her head. “Is always most generous, but at the moment all his attention to our duty in Wales is going to the clearing of Raglan Castle—he feels he owes it to our ancestors as well as to our national heritage.  And my own income is quite depleted. ‘Pockets to let,’ as your brother would say.”

“Mama, are you still feeding and clothing your two hundred poor families every year?”

“I fancy it was nearer three hundred this year, my dear, but it wouldn’t do to bandy that abroad.”

“Keeping your light under a bushel, Mama?” Georgiana smiled, then shook her head, thinking of all the misery her mother had relieved in ministering to both the physical and spiritual needs of these people.

“You are too good, Mama. I’m confident something will turn up for your chapel. You won’t be obliged to abandon those souls in Wales. Perhaps The Society for Promoting the Enlargement and Building of Churches and Chapels? After all, Uncle Harrowby is its vice-president.”

The duchess shook her head and picked up another missive. “I’ve contacted them. Their funds are fully committed for the next three years. Unless, of course, I could see my way clear to increase their subscription rolls.” She dropped the paper with a wistful smile and stood. “My dear, it is past time to be dressing.” 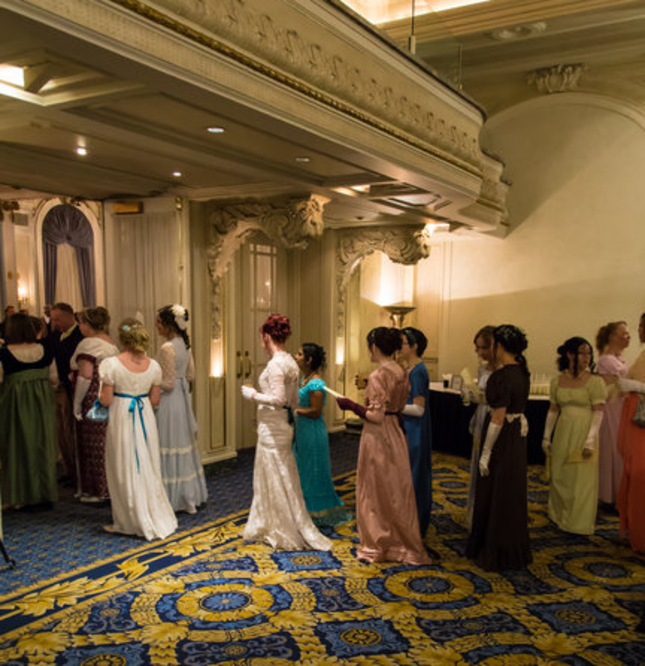 Georgiana’s fears that her mother’s concerns might dampen the festivities of the Christmas Eve ball fled  when they met at the entrance to the ballroom a short time later. She was amazed at the transformation. The duchess smiled radiantly as they walked under one of the dazzling crystal chandeliers which caused her diamond and pearl earrings to sparkle with fire like the chandeliers.

“Mama, I’m so glad you chose to wear those earrings.”

“Yes, they are my second best, but quite my favorites. I did want to wear them this one last time.”

“Last time?” But Georgiana didn’t wait for an answer to her question. Granville had entered the room. Confusion engulfed her. Would he ask her to dance? Would she have the nerve to give him the Christmas piece she had tucked in the antique cabinet at the end of the room? How would he respond if she did?

The evening was not to begin with dancing for Georgiana, however, as she was claimed first by her little sisters Blanche and Mary Octavia. “Come, Georgie, play Blindman’s Bluff with us.” “Yes, you must!” They bore her off to the yellow room to join the children’s games.

When she was finally free to join the festivities in the ballroom, it was not her handsome cousin, but rather, her brother Henry who first led her onto the floor to make up a set for a country dance. And it was Henry who then took her in to supper. At length, the dancing began again. 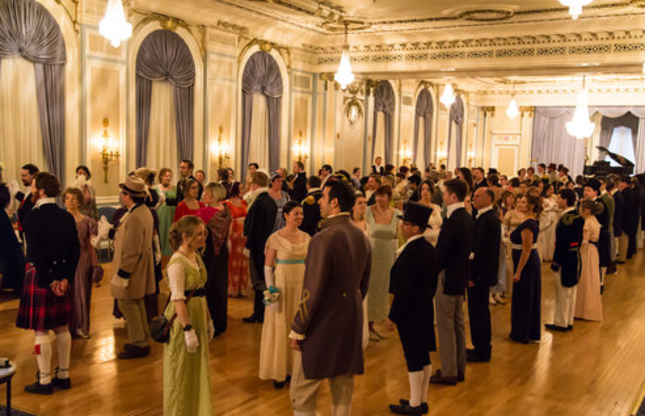 Georgiana entered the ballroom just in time to see Granville lead her sister Charlotte onto the floor. Georgiana turned and bestowed a radiant smile on the first male she saw. If Granville preferred her sister’s company to her own, then that carefully composed Christmas piece could just stay in that cabinet drawer until it crumbled to dust.

By the time Georgiana had danced with every young man in the room—but one—the company began to thin as the elders took to their beds. Now the dances changed from the lively country airs where couples stood in two rows and worked their way up and down the line in intricate patterns, to the newer, more gliding waltz, where couples danced in pairs.

“Would you care to dance, Georgiana?” The question was asked with such diffidence it sounded as if the asker expected a refusal.

Georgiana caught her breath at the serious look on Granville’s face. She took his hand.

They danced wordlessly. When the music ended Georgiana expected Granville to release her and bid her good night. Instead, as the musicians slid easily from one melody into the next with barely a pause, he continued to turn her around the floor without even requesting her permission. 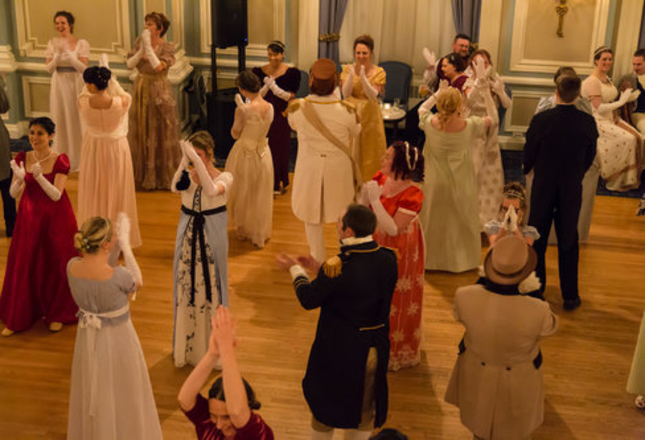 Finally, when the room was all but deserted, the musicians began folding their music and wearily putting their instruments in their cases. The steps of the dance had led them to the north end of the room, directly in front of the cabinet holding her Christmas greeting.

Should she give it to him? He had spoken so little. What if she had misinterpreted his actions? Would he be shocked? Dismayed? Bemused? She would never know if she didn’t try. She pulled open the drawer on the lower right.

He peered into the small cavity with a quizzical look and drew out the cylinder of paper. “For me?”

She nodded and looked shyly away before he broke the wafer. Don’t let him laugh.

He read the few lines three times, each time the look of wonder—and of something else—deepening on his face. At last he folded the crisp parchment and slipped it into his inside coat pocket over his heart.

His hand on Georgiana’s shoulder, he drew her wordlessly to the center of the room beneath the kissing bough. The room was deserted now except for a few servants cleaning up. But Georgiana wouldn’t have noticed if there had been a roomful of guests as Granville pulled her into his arms.

The next morning, bells called the family to the chapel well before the first light of dawn. They took seats in the gallery—large leather arm­chairs beside a splendid fireplace—while below them, the high wooden pews, running between walls lined with monuments to all the previous Dukes of Beaufort, filled rapidly with villagers. The local vicar led their pre­siding guest, Henry Ryder, Bishop of Gloucester, to the altar. Then those in the gallery gathered around the large prayer books at the front of the box, the only time their presence would be visible to those below, and joined the congregation in the Christmas Day Collect.

‘“Almighty God, who hast given us Thy only begotten Son to take our nature upon Him and as at this time to be born of a pure virgin…”’

They then sang all nine verses of the Charles Wesley hymn, "Hark! The Herald Angels Sing." Georgiana’s heart swelling as she sang "Glory to the newborn King!" from the depths of her heart. At the conclusion of the song, the men in the gallery resumed their seats rather than sneaking out before the sermon, as her father and brother usually did.

Georgiana was momentarily distracted from the sermon as she returned a smile from Granville. Christmas would be perfect, if not for her mother’s worries.

In an attempt to focus her thoughts on the service, Georgiana looked at the Christmas crib before the altar. Such a scene was common only in Roman Catholic homes, but these china figures of the nativity had been in their family since the time of Charles I when the Dukes of Somerset were Catholic. This year, however, there seemed to be something new. Georgiana puzzled. Perhaps it was merely the streaks of dawn beginning to come through the leaded-glass window behind the altar? But it looked as if the straw beside the baby had been set alight. As if pieces of the Christmas star itself shown from the manger. 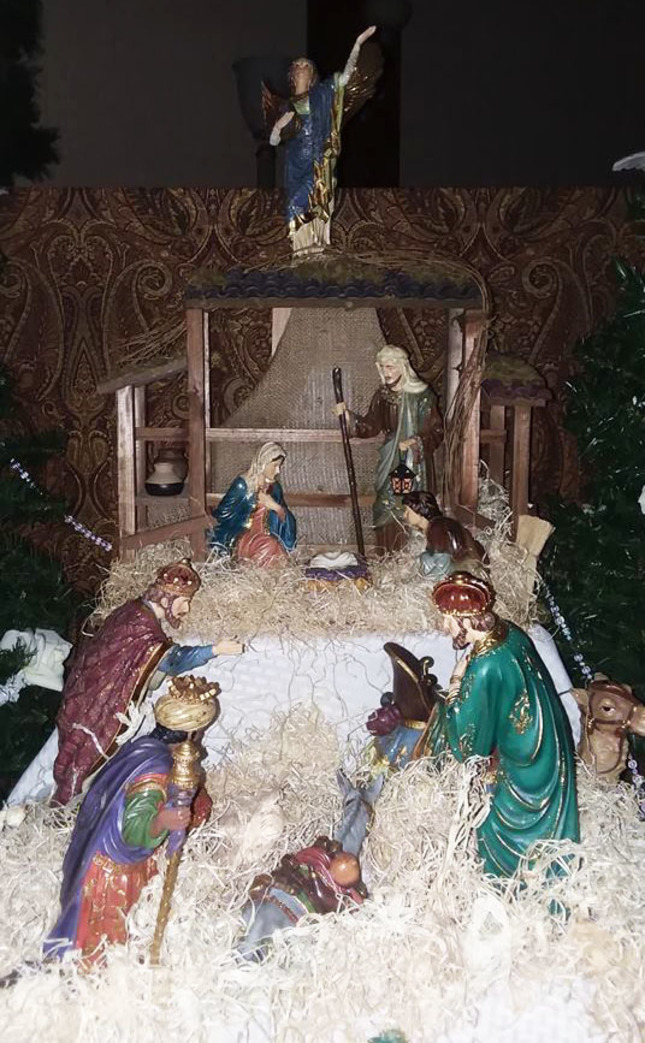 The bustle of family and festivities consumed Georgiana for the rest of the day until late that evening her mother came to her. “My dear, I haven’t had a chance to tell you my news. Did you notice anything unusual in church this morning?”

“Apart from the fact that all the men stayed through the service?” Then she remembered. “Yes, I did. A light in the crib. Like stars. But what...”

“A silly piece of sentiment, I fear, but since it was Christmas… My earrings--I am selling them to build my chapel in Wales.” Her face radiated excitement.

“But, Mama, they were your favorite pair.”

The duchess sighed. “Yes. I would much rather have sold my best, those odious blue diamonds are so large wearing them gives one a headache. They would have fetched at least two hundred pounds more. But they belonged to Mary, the first duchess, so parting with them was unthinkable.”

That spring Georgiana and Granville, with faces glowing like the duchess’s diamonds, stood hand-in-hand at the stone-laying ceremony for the new chapel.

Based on scenes from Where Love Restores, book 4 Where There is Love series by Donna Fletcher Crow 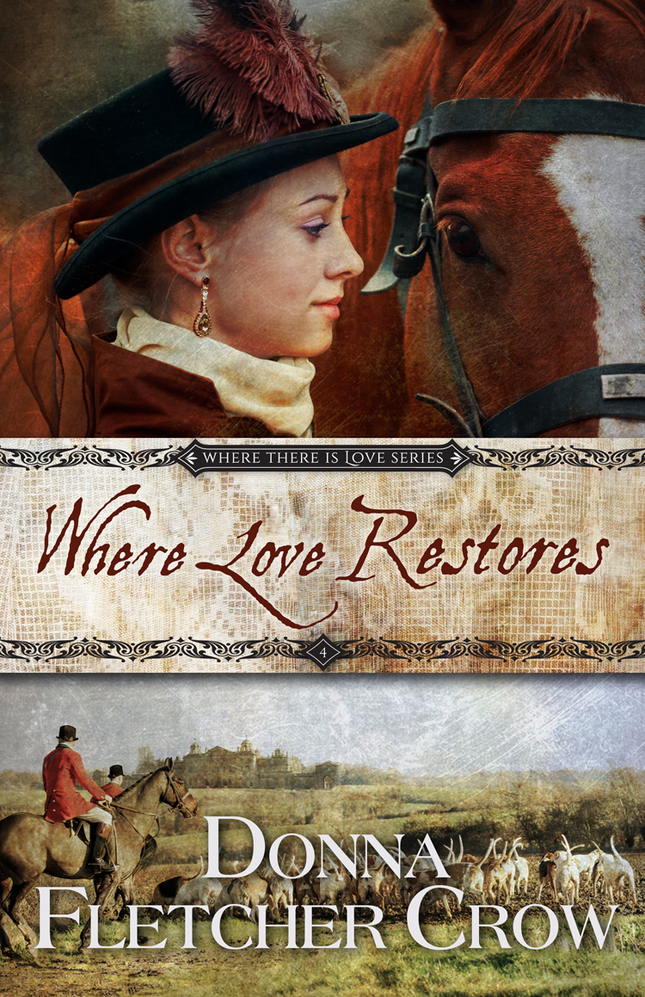 Thank you, Sheila. This version wasn't hampered by a limited word count, so I added more of the romance.
-donna, December 19, 2019

Lovely story, and the ball photos made it all feel real.
-LeAnne Hardy, December 19, 2019

Thank you, LeAnne! Actually, both were real--the Georgiana Somerset/Granville Ryder romance is historic, and the Regency ball was one I attended with my daughter and Granddaughter in Calgary in 2017.
-Donna Crow, December 19, 2019

What a wonderful experience that must have been for all involved.
-LeAnne Hardy, December 19, 2019

Yes, especially for little Felicity--she danced every dance. When the figures changed, as they do up and down the line in a country dance, her new partner was often startled--he couldn't see her until he looked down.
-Donna, December 19, 2019