Okay, I’m not at the English seashore anymore. But Jane Austen was never very far away from it, as Collins Hemingway, our guest speaker reminded us at our annual tea in honor of Jane Austen’s birthday. 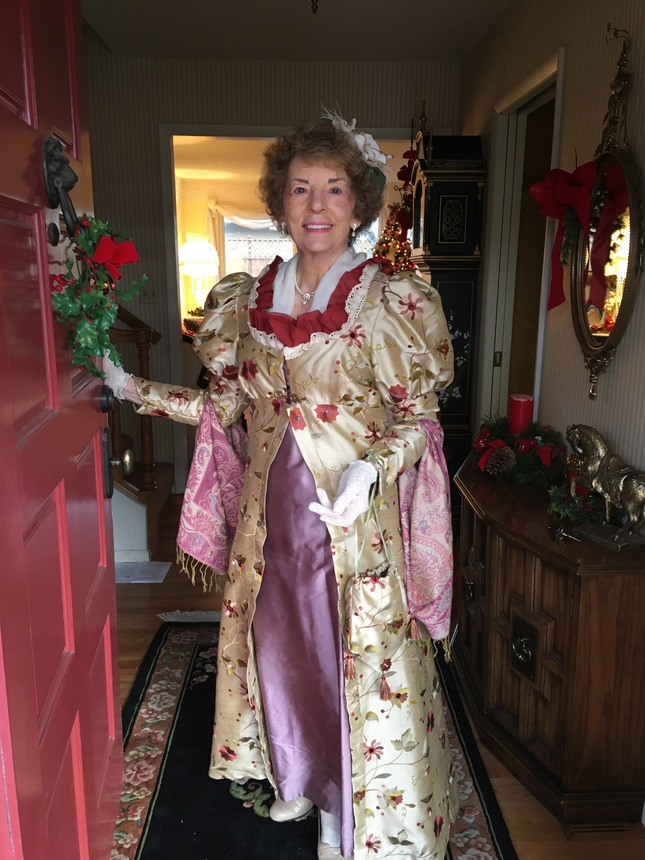 The spectacular event was sponsored by the Southern Idaho Chapter of the Jane Austen Society of North America. It began early for me when my daughter-in-law picked me up. 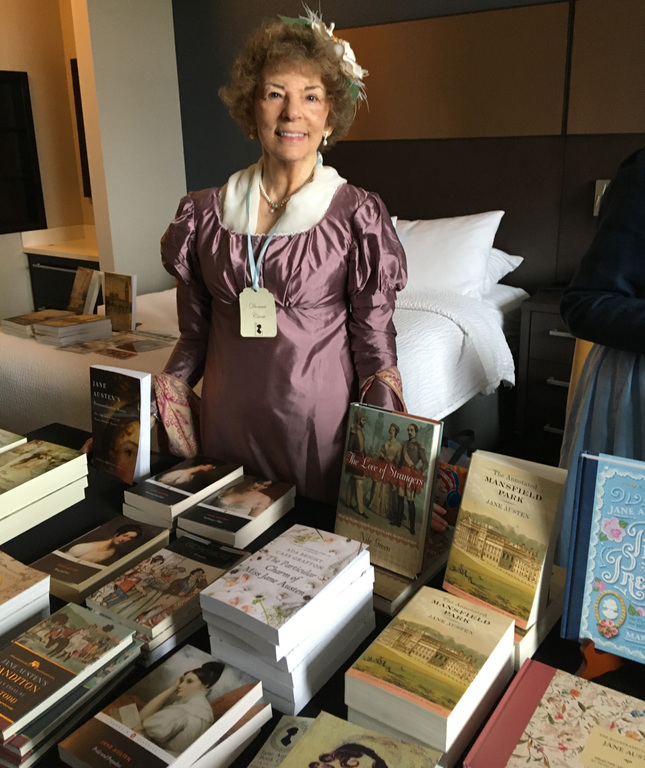 We set up the book table at the Emporium, featuring Austen-themed books for gifts, children, and the Jane Austen Book Club. 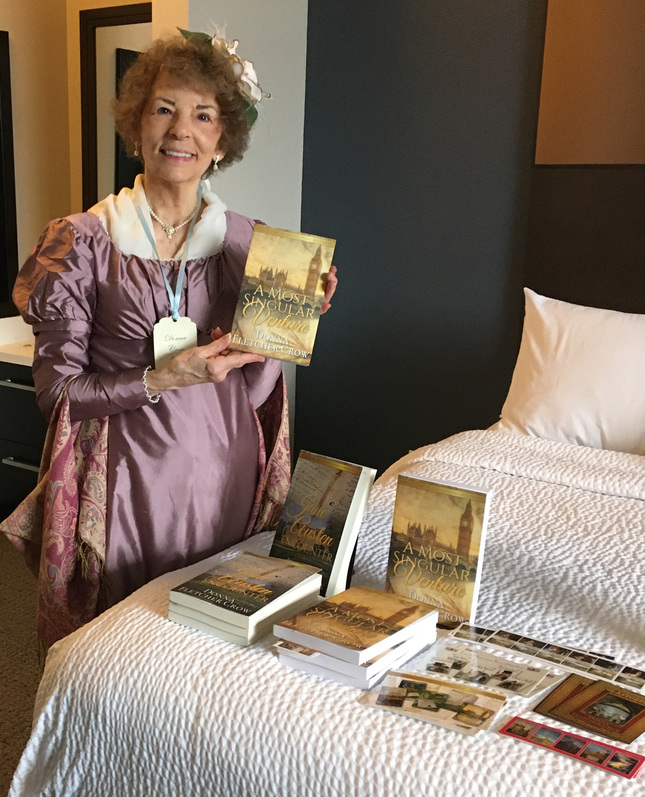 Also my two Austen Titles, A Jane Austen Encounter and A Most Singular Venture. 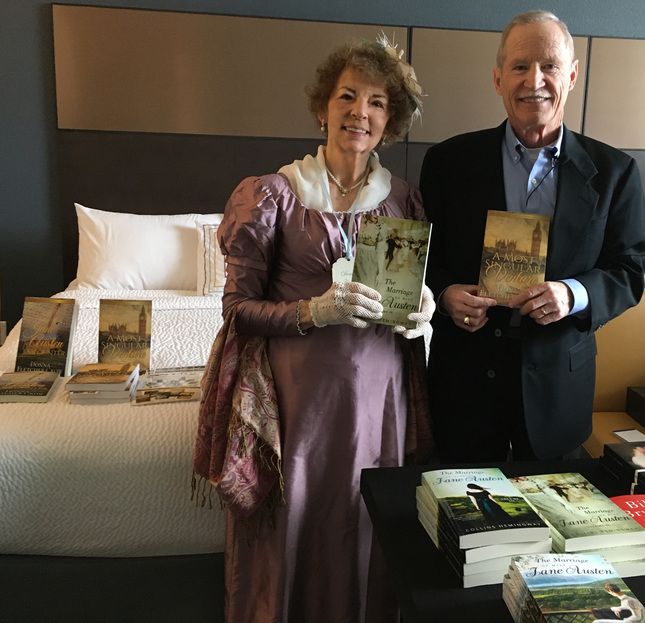 And, of course, Collins Hemmingway’s novels The Marriage of Miss Jane Austen, Volumes I, II, and III. These imaginative, well-researched stories, cover the 7 “lost” years of Jane’s life. They offer readers an ingenious answer to the question: What if Jane Austen was married during that tantalizing period of her life for which her sister Cassandra destroyed all the letters? 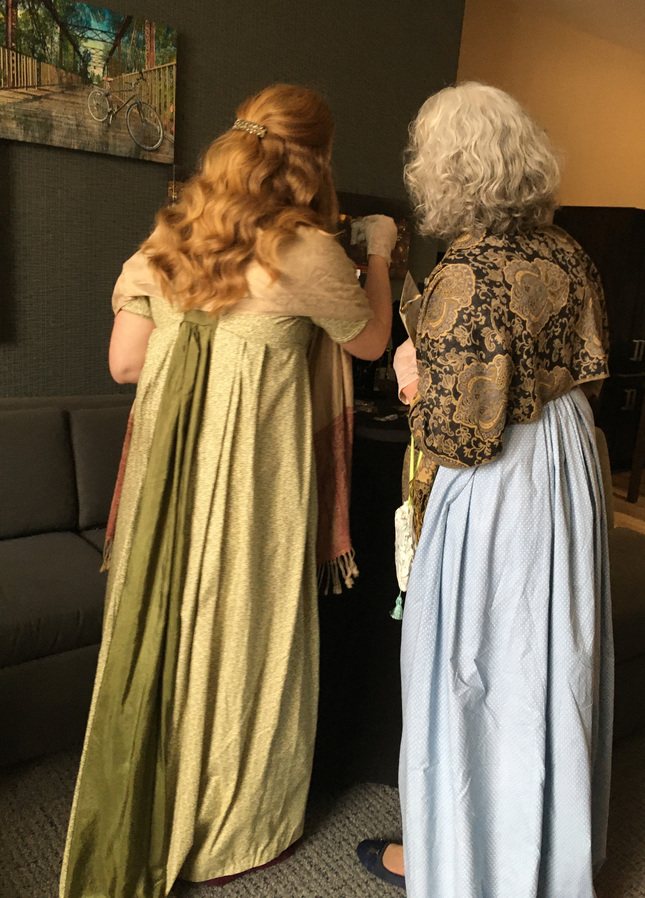 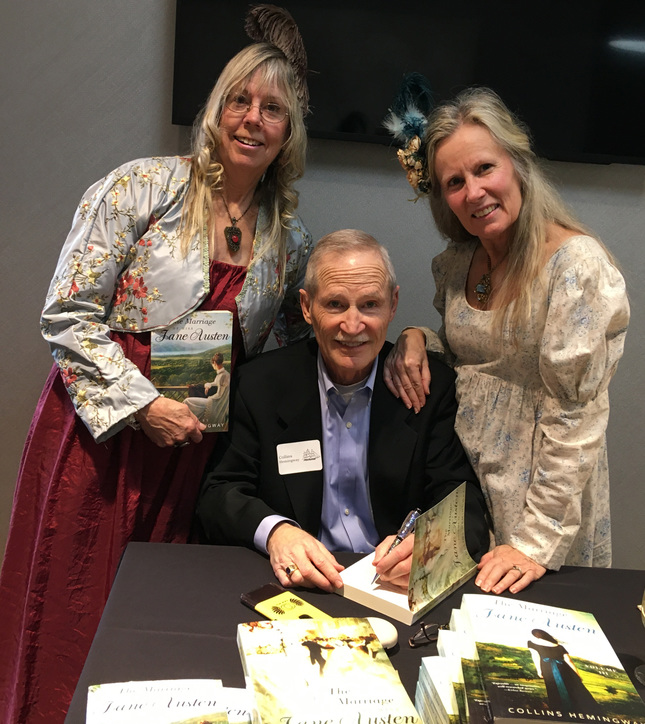 And having The Marriage of Miss Jane Austen signed by Collins Hemingway. 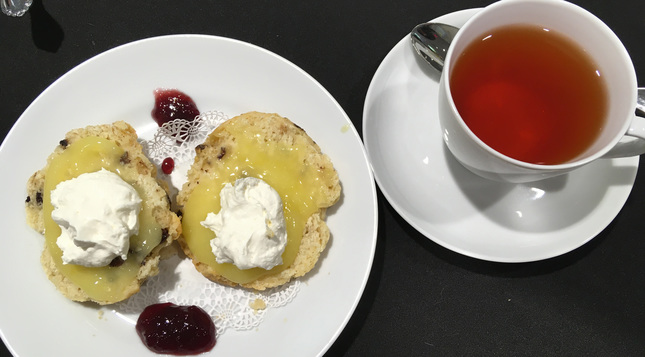 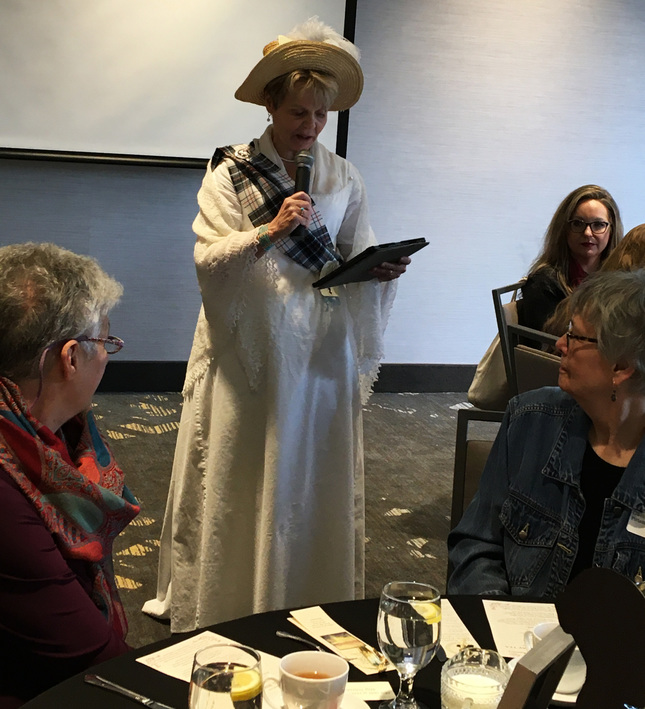 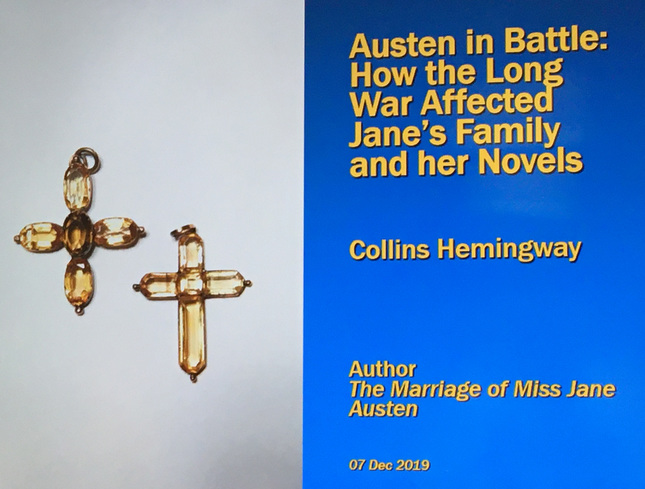 Collins Hemmingway began his informative speech by explaining how Charles Austen was able to afford the extravagant gift of topaz crosses for his sisters, for which he received a mock scolding in one of Jane’s letters. And which served as the model for the cross given to Fanny Price by her sailor brother in Mansfield Park. 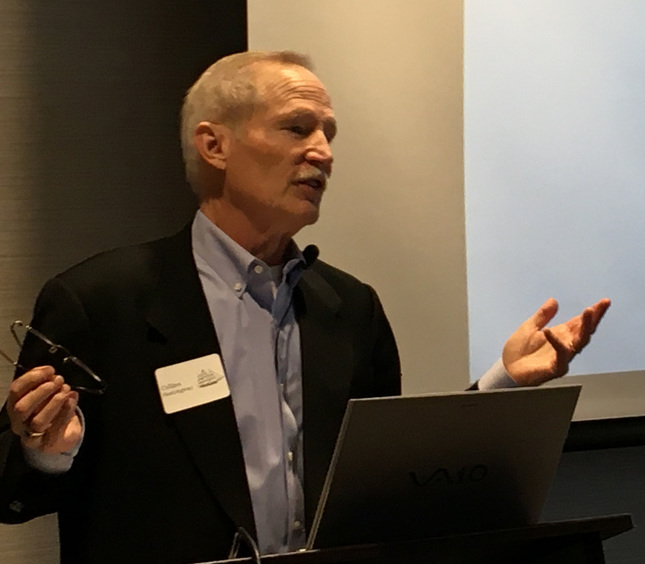 Charles was awarded prize money when, with only 4 other men, their small ship captured a French vessel. They managed valiantly to hold it overnight in a 150-mile gale until the flagship Endymion could complete the victory.

Hemingway reminded his listeners that England was at war with France for all of Jane’s life. The only exceptions were the brief Peace of Amiens and after the final victory at Waterloo. Although conditions were less than peaceful in the Austen family during the period of bank failures following the cessation of hostilities. Jane’s brother Henry’s bank failed, causing serious losses to her brothers James and Edward. This resulted in the brothers having to reduce their financial support of the Austen women.

The war went on so long because France was the strongest on land, and England “the whale” was strongest at sea. This led to a stalemate.

Besides the sailor brothers, other Austen men were involved in the war. Jane’s father and brother James, both clergymen, recruited for the militia. Her brother Edward was the Deputy Lieutenant for the county militia, leading the Godmersham and East Kent Volunteers.

Jane’s favorite brother Henry took time off from his Oxford studies to join the militia. He served with the soldiers protecting the English Channel against a French invasion. Later, he served as paymaster for his regiment, a position which led to his becoming a banker.

Francis and Charles, the well-known “Sailor Brothers,” served as part of the “wooden wall” between England and France, making the Royal Navy the pride of England. Both brothers rose to the rank of Admiral. Charles became a Rear-Admiral. While Francis, known as “Nelson’s Captain,” rose to become Admiral of the Fleet. Both brothers also served as ambassadors.

In addition to the historic record, Hemmingway pointed out Jane Austen’s use of the war in her novels. In Mansfield Park Fanny Price’s father is a wounded marine. Sir Thomas Bertram equips Fanny’s beloved brother William to go to sea. Henry Crawford helps William receive a commission.

William Price is not just based on Charles, as some think, because of William’s gift of the topaz cross. Jane was actually very even-handed—William is Francis’s middle name. William serves on 2 of Charles’s ships and 2 of Francis’s ships.

In Persuasion we see the effect of battle as the naval officers return from the war. Captain Wentworth has returned wealthy enough to take a wife. Interestingly, Wentworth won his commander rank at the Battle of San Domingo—which was the battle that brought glory to Frank. Admiral Croft has returned wealthy enough to rent a grand country home. Dick Musgrove is killed. Captain Harville is wounded. Captain Benwick is, rather like William Price, just getting started.

When Francis was asked if Wentworth was based on him, he said he didn’t know about that, but he claimed a kinship with Captain Harville because they enjoyed the same domestic activities such as wood-working.

This is particularly interesting in the light of the moving speech Harville makes near the end of the novel: “if I could but make you comprehend what a man suffers when he takes a last look at his wife and children, and watches the boat that he has sent them off in, as long as it is in sight, and then turns away and says, ‘God knows whether we shall ever meet again!’” 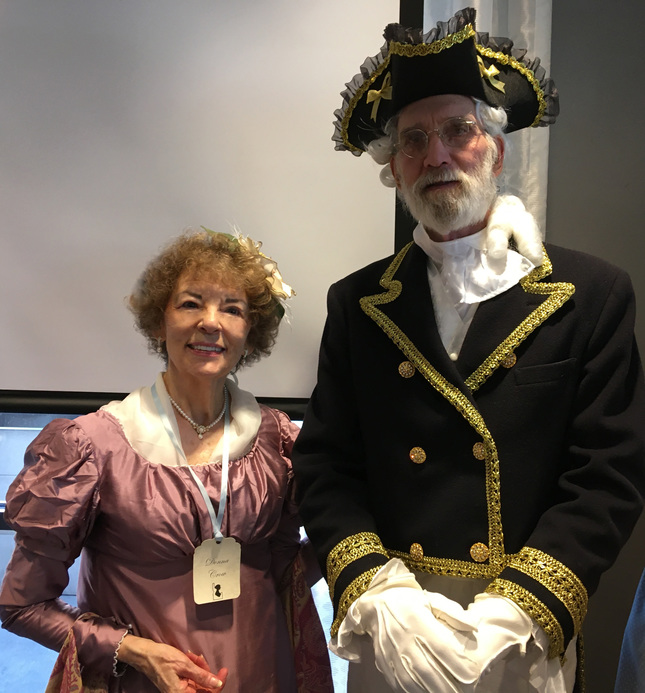 It was especially fun that one of our attendees dressed in naval-inspired regalia.

If you have missed the earlier posts on “Jane Austen at the Seashore,” the entire series can be found here. Articles applying to the Royal Navy are those at Southampton and Portsmouth.

Well, we know Cassandra burned a large number. Makes one shudder to think of it! But there is always hope something more will turn up.
-Donna Fletcher Crow, December 19, 2019