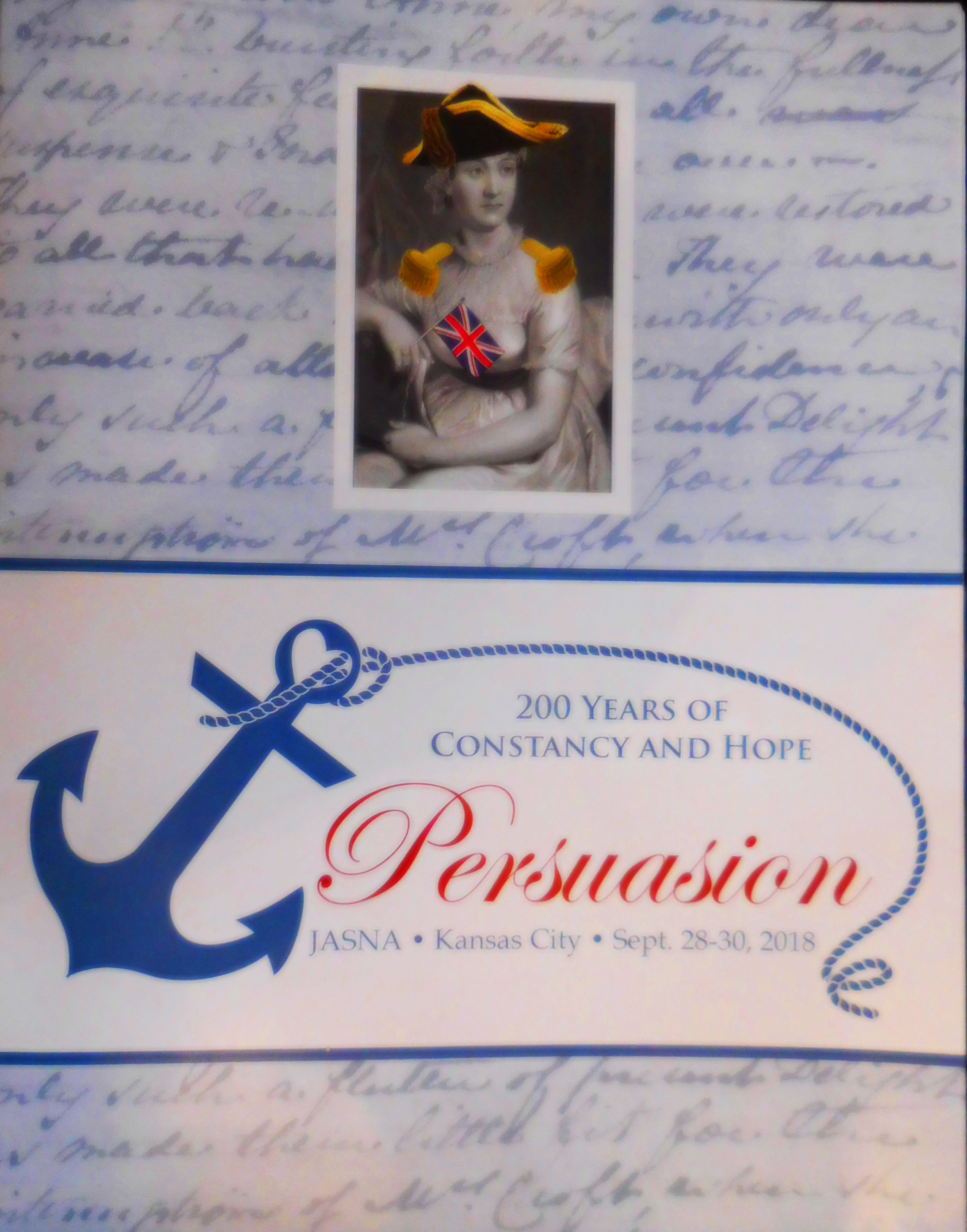 I have just returned from the Annual General Meeting of the Jane Austen Society of North America in Kansas City, and a great conference it was. It was the largest AGM in history with more than 900 in attendance, 200 of whom were first-timers. Our theme, celebrating the 200th anniversary of the publication of Persuasion, Jane Austen's posthumously published novel, was "200 Years of Constancy and Hope." The Royal Navy, Captain Wentworth, Jane's sailor brothers, and seaside resorts such as Lyme with its famous cobb, featured largely. 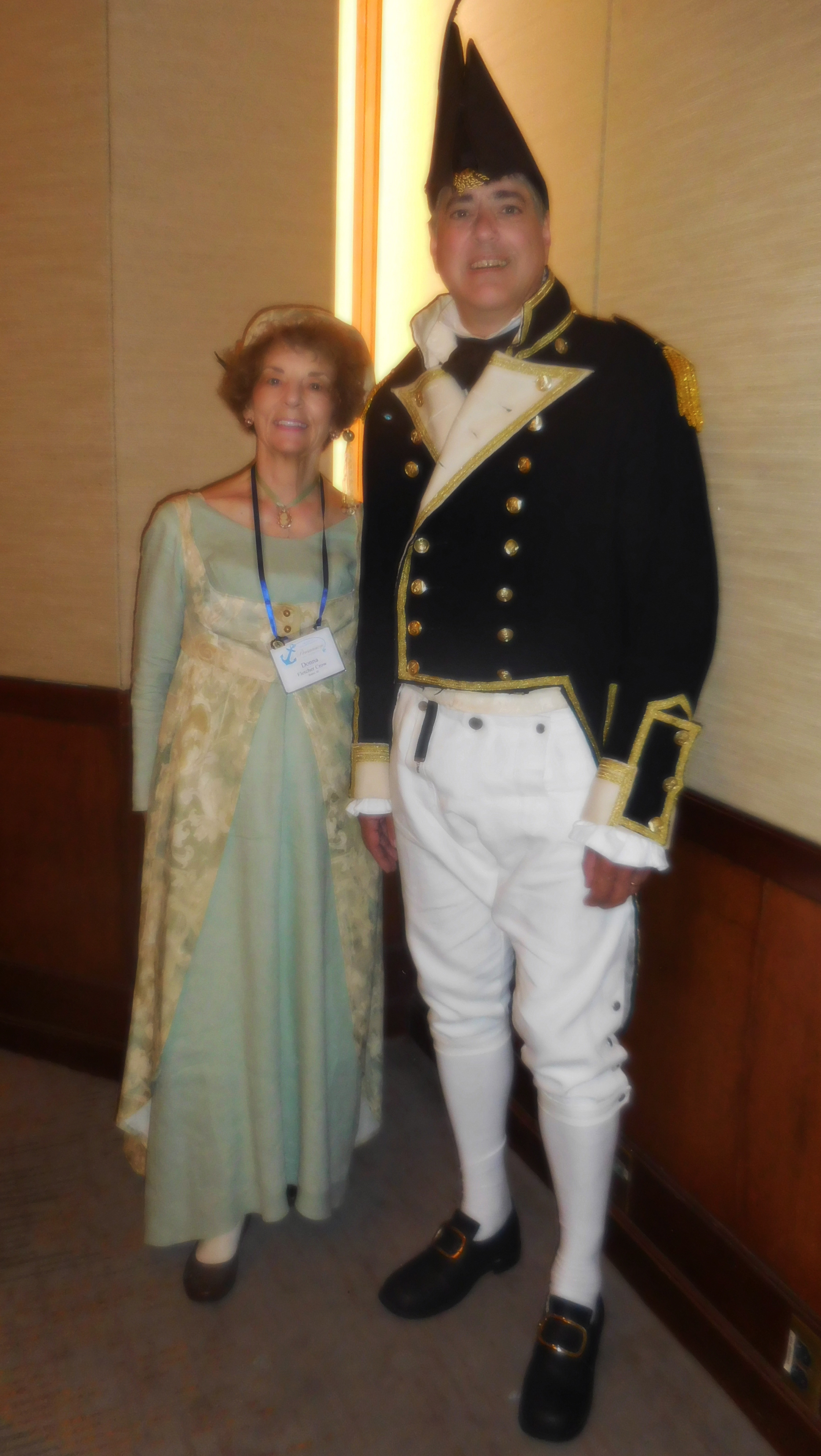 My head is still swimming with the amount of knowledge imparted by the plenary and breakout session speakers. I took pages of notes from such Austen luminaries as John Mullan, Amanda Root, Sheila Hwang, Randi Pahlau, and Collins Hemingway which I will be sharing with my readers in coming days. As they say, "Watch this space."

For this post, though, I want to focus on the wonderful frivolities that make Jane Austen Society AGMs such a parallel universe experience. The thing about Jane Austen is that there's something for everyone: serious academics, foodies, fashionistas, danceaholics, and, yes, even vampires. I'll raise my hand to all but the last. It is also a delight to observe the cross-generational involvement: sisters, mothers and daughters (with daughters ranging in age from grade school to ones who are mothers themselves), and grandmothers and granddaughters. Indeed, I would love to bring my Janeite granddaughter one year.

I'm getting ahead of my story here, but a fun moment for me occurred at the ball when three 20-something young men sporting tattoos and baseball caps wandered in, curious to learn what was going on. Yes, they had heard of Jane Austen. "Have you read any of her books or seen the movies?" I asked, hoping to encourage rather than embarrass them.

They all nodded and mentioned the movies and high school classes. "Yes," the bearded one said, "Pride and Prejudice and Zombies."   I agreed that could be a good place to start. When I returned to the floor to join a set for the next dance another lady in our conversation group had taken out her iphone to explain male attire of the Regency, as one of young men had been taken by a dancer sporting a green velvet coat, an embroidered waistcoat and lace jabot.

Indeed, dressing up is, for many of us, an important part of entering into and understanding Austen's world. This year I added that all-important item, a cap which no Regency woman of mature years would be seen without--even under her bonnet. I was also period correct underneath with a handmade shift and stays made by a friend who loves the lectures and learning, but admits, "I'm in it for the clothes." The stays were wonderful. Not only did my dress fit properly, but also I was able to maintain proper posture without getting a backache. I wish they would come back into fashion--but in a style that laced in front. My husband made a patient, but fumbling lady's maid.

Among the special interest sessions I enjoyed most--after the ball, which always ranks at the top, you understand--were the Cheese Tour of Jane Austen's England, Tea and Fashions at the Pump Room, and shopping at the Emporium. I'll be blogging about each of these as well as sharing information from my favorite speakers in the coming days.

I should have said above, but I'll be mentioning in future blogs, an enormous "Thank You!' to Julienne Gehrer who did an amazing job as chair of the event and to all the Kansas City JASNA team who were wonderful hosts.
-Donna, October 4, 2018

Delicious!
It must have been bittersweet returning to the 21st century.
-Janet Grunst, October 4, 2018

What an interesting thought, Janet. Actually, Jane is always with me.
-Donna Crow, October 4, 2018