#MysteryExchange - The Murder That Inspired a Romantic #Mystery Novel, with @Kris_Bock

Day 3 in my Mystery Blog Exchange. Today meet Kris Bock with her novel What we Found. Then go over to Kris's blog and read about my Victorian true-crime A Lethal Spectre, Lord Danvers investigates, 5. If you like mysteries based on true events, you'll enjoy both books.

Welcome, Kris. Tell us about writing What We Found. 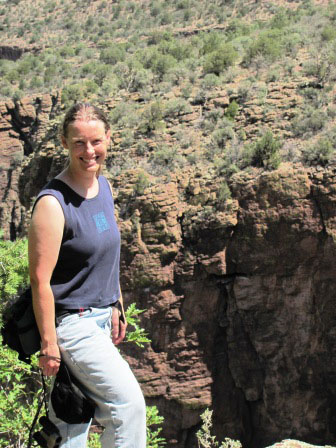 Many writers are inspired by real events or people in their lives. This makes difficult situations a form of research. “This stinks, but maybe I can use it in a book!” I write romantic suspense for adults as Kris Bock and middle grade novels (for ages 9 to 12) as Chris Eboch. In most of these books, the connection to real-life experiences isn’t obvious. In my romantic suspense Whispers in the Dark, my heroine is an archaeology Masters student working at the fictional “Lost Valley” monument, which is closely based on Hovenweep National Monument, where I once spent a week camping. In Counterfeits, the heroine inherits a children’s art camp, which I based on a camp near Jemez Springs, New Mexico, where I’ve attended many writing retreats. Using real locations helps me bring the settings to life even if I did not, for example, fall into a ravine while fleeing from a bad guy.

But What We Found was inspired by helping to uncover a true case of murder.

Lest you think that makes me some kind of amateur detective, my involvement was purely accidental. Two friends and I were exploring the mountains, looking for some suitable gravel to try gold panning (because, why not?). We found a likely spot and were about to take a sample when the guys smelled something horrible. A glance in the right direction showed them a dead body hidden just out of sight of the path.

The next hour passed in a surreal blur. We'd left our phones in another vehicle, at the base of the mountain. Once we retrieved them, we still had to find a place with cell reception. We called 911, waited for the police, and led them to the body. Later that night we were interviewed by detectives.

By the following day, they had identified the body as a woman who had been missing. Her estranged ex-boyfriend was already a suspect in her disappearance, but without her body they'd have trouble prosecuting him. Seeing her picture on TV and learning about her family made the situation real in a new way. We wanted justice for someone we’d never met.

As a writer, I knew I was getting rare first-hand experience into something powerful. I took pages of notes during that first week, even though I didn’t know how or when I might use them. I was fortunate to be with two men who talked openly about their experiences: the nightmares, the guilt over violence against women, the anxiety that came from now wondering what you might see in the bushes.

Three things struck me most strongly.

First, we all felt deeply invested in the case, even though we’d never met the woman in life and didn’t know anyone else involved. We followed the news stories, even though they made us anxious. When the murderer was finally sentenced … well, we weren't happy (the sentence of less than 20 years of less than 20 years was not, in our opinion, nearly long enough), but we were relieved that it was over.

Second, it affected every aspect of our lives for weeks. Even though the likelihood of finding another body, or even witnessing a different crime, was extremely slim, we were on high alert at all times. It was a struggle to put it behind us while still honoring the memory of the victim and holding on to what we had learned.

And finally, someone in law enforcement said that often people don’t report crime scenes like these. How could someone walk away from that? I started thinking about all the reasons someone might want to cover up their discovery, even if they had nothing to do with the crime. And that inspired What We Found.

Several years passed before I felt distant enough from the experience to fictionalize it, but I still had all those notes and memories to draw on. Some elements of What We Found, mainly the emotional ones, are taken directly from that experience. Most character and plot elements are fictional, although some are loosely inspired by the real events.

This isn’t an experience I would wish on anyone, but we’re glad we helped bring a crime to light and a murderer to justice. And it led to what I consider my most powerful and personal novel to date. After all, one benefit to being a writer is that the worst experiences are still valuable as research.

That’s the truth behind What We Found.

When Audra goes back to her small hometown after college, she simply wants to fit in, work hard, and protect her 12-year-old brother from their overbearing mother. Finding a dead body in the woods changes everything.

Her former crush, Jay, insists they don’t report the body. But the dead woman was murdered, and someone starts targeting Audra. She has to stand up for herself in order to stand up for the murder victim. It’s a risk, and so is reaching out to the mysterious young man who works with deadly birds of prey. But with danger all around, some risks are worth taking.

This title stands alone and is not part of a series. 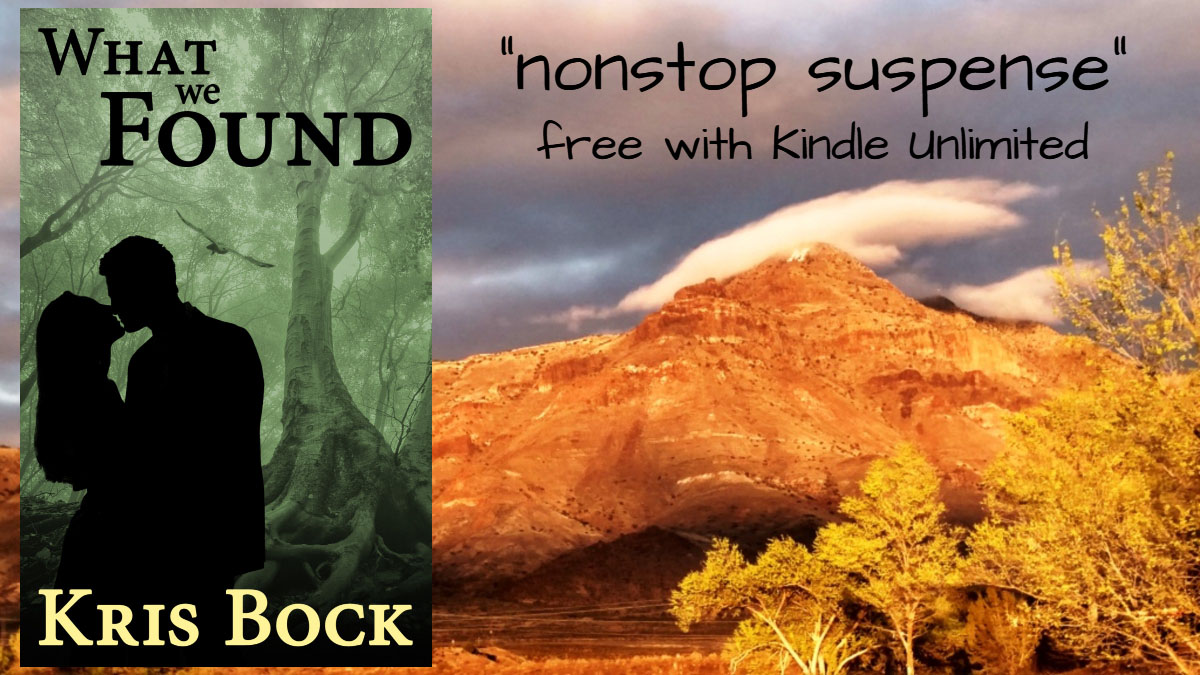 An engine started. The battered old truck stood out like a janitor at the prom. It was dark blue, splattered with mud and probably decades old, with a cap on the bed. The evening sun glared off the side window, but as I walked slowly past the front I saw a figure inside – the one-handed man. He had his hand on the wheel but his head back, eyes closed.

I paused, studying his face. I guessed he was in his twenties, with short, light brown hair and pleasant features in a mask as still as death.

He opened his eyes and looked straight into mine.

I couldn’t move as he held my gaze. My heart thumped against my ribs. He studied me without expression, no smile, no frown, nothing in his face but weariness.

Finally I had to blink, and once the eye contact was broken, I jerked my gaze away and kept moving. I quickly turned between the next two cars, to get out of his view. I’d have to cross behind his truck to reach my car, which might look odd if he was still watching, but I didn’t care so long as I got out of there, fast.

I noticed the rusty screeching again. It was coming from his truck. I stumbled to a stop, staring at the back of the truck. What could be making that sound? The tailgate and back window on the cap were closed, hiding the sight inside, but the screech came again and again like someone – something – screaming.

The screams seemed to echo in my head. I couldn’t take any more. I turned away with a hand over my mouth to hold back my own scream and hurried to my car.

Kris Bock writes novels of suspense and romance with outdoor adventures and Southwestern landscapes. All ebooks are .99c to $3.99 or free with Kindle Unliminted. 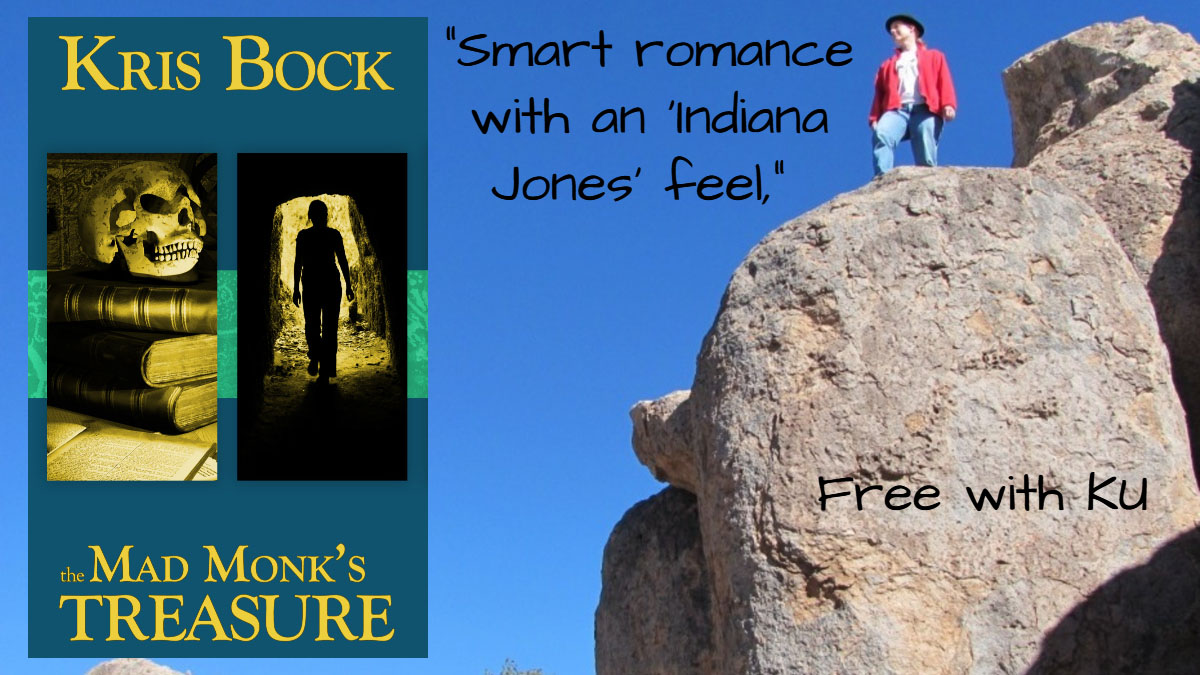 The Mad Monk’s Treasure follows the hunt for a long-lost treasure in the New Mexico desert. In The Dead Man’s Treasure, estranged relatives compete to reach a buried treasure by following a series of complex clues. In The Skeleton Canyon Treasure, sparks fly when reader favorites Camie and Tiger help a mysterious man track down his missing uncle. Whispers in the Dark features archaeology and intrigue among ancient Southwest ruins. In Counterfeits, stolen Rembrandt paintings bring danger to a small New Mexico town.

To learn more about her latest work, visit www.krisbock.com or her Amazon page. Sign up for Kris Bock’s newsletter for announcements of new books, sales, and more.

And thank you for being my guest--what a wonderful variety of books you write!
-Donna, July 7, 2018