October 25 is the day the church remembers the brothers Crispin and Crispinian, cobblers who were martyred under Diocletian. The day has become more famous, however, as the day of the Battle of Agincourt because of the stirring speech Shakespeare has the young Henry V make to his troops on the even of battle.

In my book A Newly Crimsoned Reliquary, book 4 The Monastery Murders, Felicity, in Oxford, goes to a coffee house where a local actor is reciting the speech.

From the far side of the octagonal room an actor strode forward clad in a red and blue Plantagenet surcoat. “I thank you, brave fellows all.” He bowed and swept the room with his arm. “We join in revels as others could have done on this very spot to celebrate the victory of brave Harry, for this very building in which you are enjoying your libations, was more than a century old when Harry so inspired his troops.” Felicity gazed around her with a frisson of wonder as King Henry strode through the room proclaiming:

This day is called the feast of Crispian:

He that outlives this day, and comes safe home,

Will stand a tip-toe when the day is named,  And rouse him at the name of Crispian…

All chatting, eating and drinking stopped as everyone was drawn into the moment:

And Crispin Crispian shall ne er go by,

From this day to the ending of the world,  But we in it shall be remembered;…

Felicity noticed several in the room mouthing the lines with Harry:

We few, we happy few,  we band of brothers;…

And now Felicity joined in repeating the words in her head:

And gentlemen in England now abed

Shall think themselves accursed they were not here,  And hold their manhoods cheap whiles any speaks  That fought with us upon Saint Crispins day.

The book is free October 23-17 in honour of St. Crispin and for readers looking for a spine tingling Halloween read. 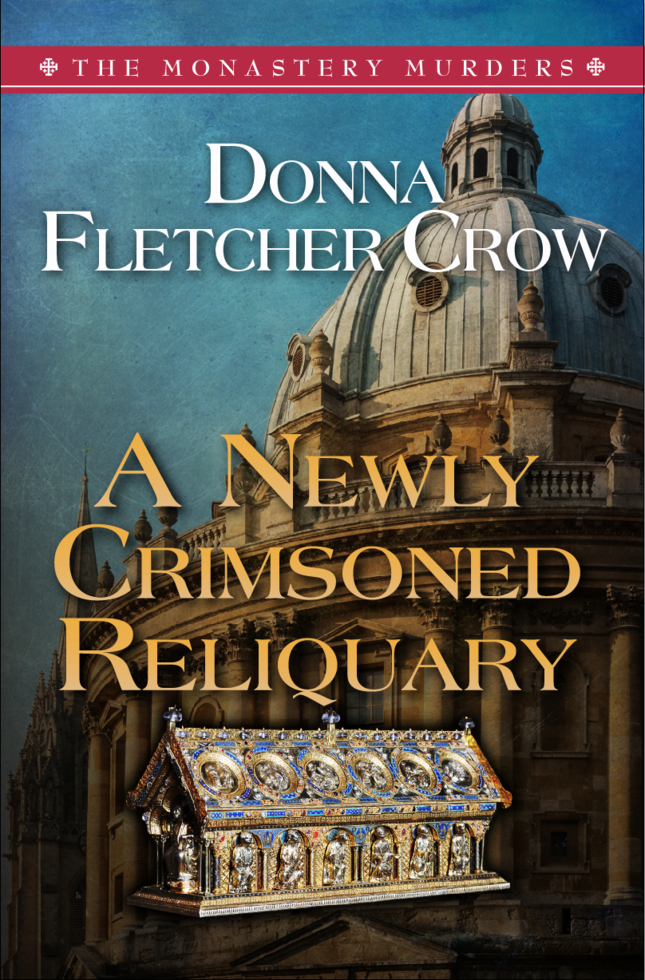 Huzzah! You used the picture from my all time favourite movie: and that speech! It never fails to send shivers up my spine but in a good way.
-English Lady , January 16, 2018

Thank you so much, English Lady! I totally agree. How lovely when readers find an old post. You might like to know that I use that quote in my novel A Newly Crimsoned Reliquary when my heroine is in Oxford on St. Crispin's Day https://www.amazon.com/dp/B01NBF5BH2/ref=sr_1_1?s=digital-text&ie=UTF8&qid=1480614940&sr=1-1&keywords=a+newly+crimsoned+reliquary&linkCode=as2&tag=themonamurd-20&linkId=WYW44EOSWI7FJX4N
-Donna, January 16, 2018

I purchased the book a while ago when it was going free. So good to find another Henry V fan, I recall a reference to it in the Second Elizabeth and Richard Mystery as well.

In a way I don't care if Henry really said those words: they're just so moving and the play is so good. Some of The Bard's best work I think.

Goodness--you remember my books better than I do! I had forgotten that Elizabeth and Richard did Henry V, too. I so agree about the value of speeches--like John of Gaunt' septer'd Isle speech in Richard II. Also, one of our Idaho history heroes is Chief Joseph who, after the disastrous Nez Perce wars is reputed to have said, "I will fight no more forever." Perfect--no matter what the historians say.
-Donna, January 19, 2018

Awww, I won't speak badly of historians: they are usually very passionate about the past, do a hard job, and then still get people just repeating stuff they've read in a novel or seen on TV as 'fact'. Which has to be depressing.

That scene only stuck in my mind as it's my favourite Shakespeare play, and you may have noticed I am a little obsessed with it.
-English Lady , January 20, 2018

Smiles. Never think I meant to be denigrating historians! I can't imagine where i would be without their work to rely on!! I just meant to be saying that there is value and truth in poetry as well. I maintain that novels can tell the truth, too.
-Donna, January 20, 2018

Sure you didn't (although some novelists do, sadly). I know C.S.Lewis was very keen on the notion that Poetry and Myth could convey truth, and there may well be something in it.

I read a lot of novels, and historical novels too. I do enjoy them, but the issue I have is when some people take them as fact without reading about the subject anywhere else.
Novel can tell the truth, but the way I see it, they're primarily intended to entertain, not educate.
-English Lady , January 21, 2018

Madeline L'Engle was also very big on the idea that fiction should tell the truth.

Hmmm--yes, a novel's primary function has to be to entertain--otherwise one should write an essay or non-fiction book, but I do hope my novels educate, too. My goal is to "educate" by giving an accurate picture of the time and place I am writing about.