As I have said before, one of the best things about attending the annual Jane Austen Society of North America AGM is the delightful people one meets. This year was no exception and one of my fun connections was a sister Austen Author Anngela Schroeder. We met the first day at afternoon tea and then had the fun of making Regency bonnets together. 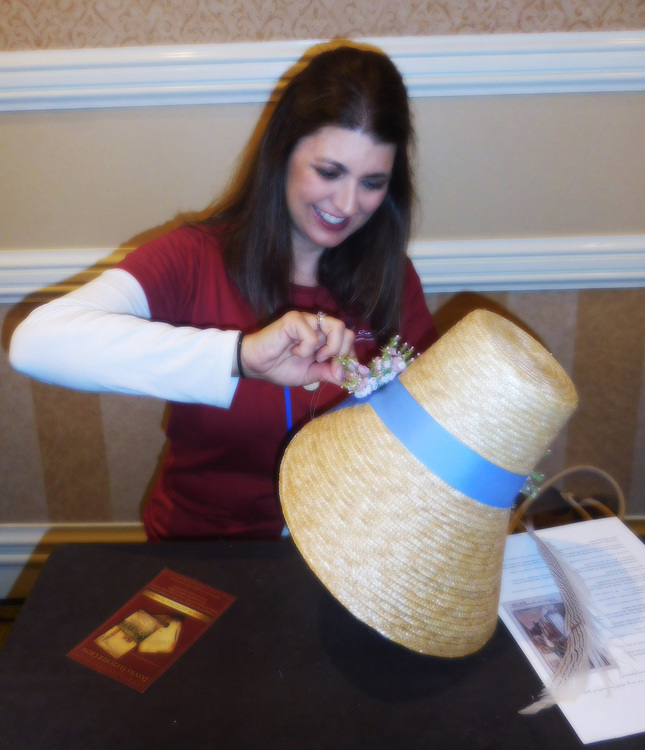 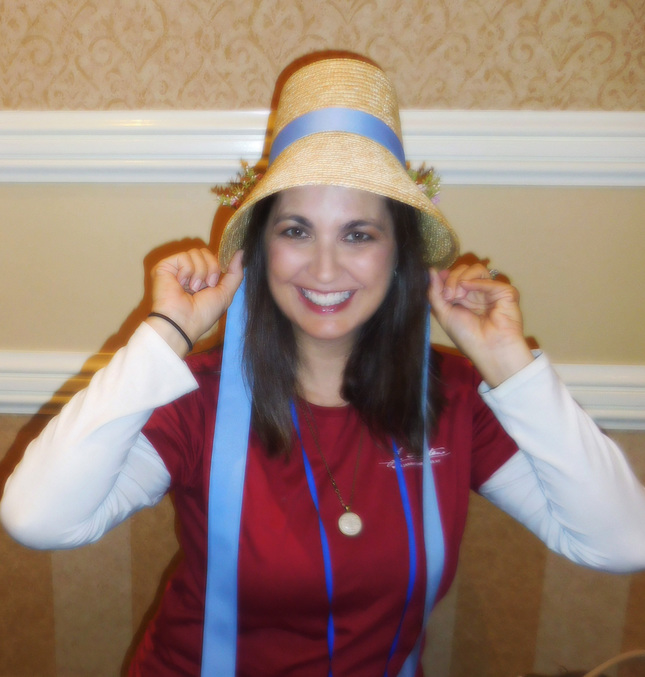 Anngela mentioned that she was in the middle of a blog tour for the release of her newest Austen title The Goodness of Men. Since every minute was packed full of lectures, events and activities we had little time to visit, so I am looking forward to learning more about Anngela here. 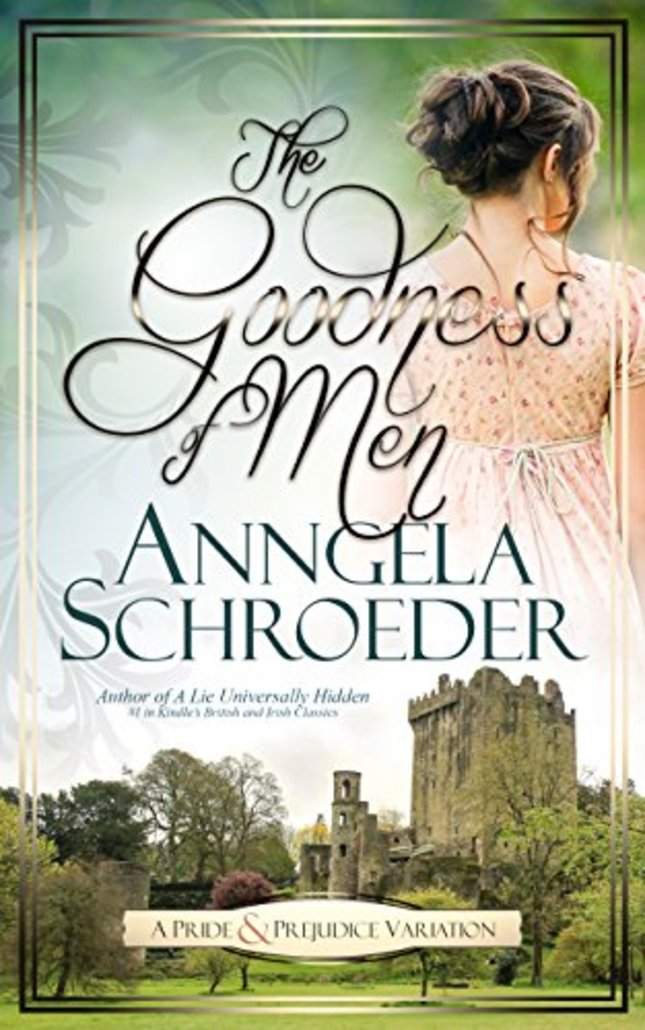 Anngela, let me begin by asking you to tell us something about how you came to Jane Austen.

I had always known of Jane Austen, but as a girl had been exposed more to Charlotte Bronte.  It was not until I was in college and a professor had us read Persuasion that I stepped into the world.  But, in all honesty, it was not a very positive experience.  The professor gave us two days to read the novel, and then did not discuss it.  I was a little overwhelmed and found little enjoyment in the world of Anne Elliot.

However, as a graduate student, a friend loaned me the BBC version of Pride and Prejudice one night and I was hooked.  I immediately picked up the book and became obsessed with the story.

I am delighted to participate in your blog tour for your new release The Goodness of Men. Tell us about it.

The Goodness of Men came about with the vision of a scene.  I thought, What if Elizabeth saw Darcy in a scene that made her begin to question all her previous conceptions of him and showed he was not as arrogant or proud as she believed?  And with that, the scene in the beginning of chapter 2 was born, where Elizabeth glancing out the window of the carriage and seeing a tall handsome worker in the fields.

After that, I wanted to show the goodness of Darcy, and the other men in the book, compared to Wickham, who she realizes only has all the appearance of goodness.

That is wonderful. I love a strong thematic structure in a novel. And I believe you have an earlier Austen title, A Lie Universally Hidden. That is a very clever title, indeed. Tell us more about this book, too. 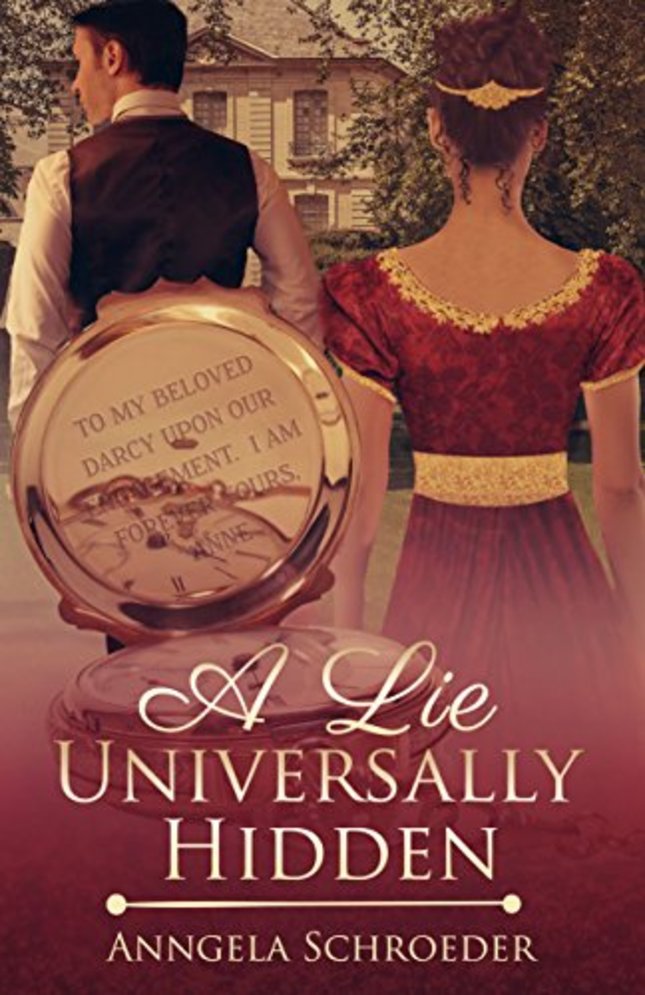 A Lie Universally Hidden was my first full length Jane Austen Fan Fiction novel.  It deals with the idea that Lady Catherine has a note signed by Lady Anne Darcy giving her direct desire that her son Mr. Darcy should marry his cousin Anne de Bourgh.  In the novel Elizabeth is being courted by a long time family aquainatnce as well, so they begin their relationship as friends.

That sounds like a very good variation, rather turning the story on its head. How do you go about researching the tightly structured Regency world?

I read a lot, watch numerous documentaries, and married a history teacher, so I am able to get fairly accurate information. I also have a fantastic editor, Christina Boyd, and great writing friends, such as Joy Dawn King, who keeps me going in the right direction.

I love to be historically accurate, although I have taken liberties with some things. The most recent being using the Russian poet Pushkin as a reference in my last novel. I enjoy his work, and although the inaccuracies were there (he would have only been 13 and not famous when the story happened) I took a little poetic license, and I do not believe it devalued the novel at all.

I see that you have written books before these Jane Austen titles. What difference do you find working in the Regency period?

The regency period has a much more structured set of rules that must be met.  It forces me to become more creative and inventive with our dear couple.

Your Quest for Camelot interests me because I, too, have written an Arthurian novel. I would say that Jane Austen and King Arthur have always been my great literary loves. Do you feel the same way? 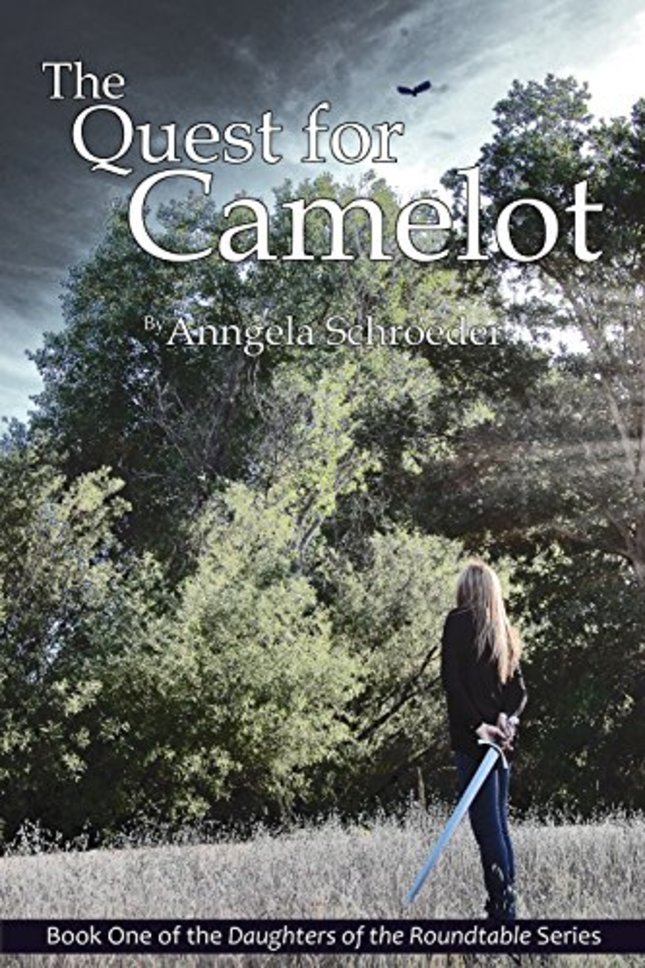 I have always loved King Arthur, and now with my love for Jane Austen, I feel that the best of both worlds may collide one day.

Thank you so much for visiting with us today, Anngela. Where can my readers find you on the internet?

Anngela, it was such fun to visit with you here today. I look forward to reading your books, they sound wonderful. All the best on your blog tour.
-Donna, October 19, 2017

Congratulations on the latest release, Anngela! You did a lovely job with the bonnet.

So very proud of you, Ms A. I admire your deep love and affinity for your Miss Jane Austin and her Mr Darcy. I so want to write cuz I want to be just like you.
With my greatest love and affection- Susan ❤️❤️❤️
-Susanphippscarr@gmail.com, October 19, 2017

Denise and Susan, thank you so much for stopping by Anngela's post and your great supportive comments! I know you made her day!
-Donna, October 19, 2017